Chandigarh: As per media reports some known faces of the Aam Aadmi Party and the ruling Shiromani AkalI Dal (Badal) are set to join the Congress party. SAD (Badal)’s Deepinder Dhillon and Harinder Pal Mann alias Harry Mann and former AAP leader Punjabi singer Balkar Sidhu are likely to be inducted to the Congress party.

Actually it’s a like a comeback in the Congress for Deepinder Dhillon and Harry Mann who had early shifted their loyalties from the Congress to the SAD (Badal).

Besides, possibility of some more prominent faces, including Punjabi artists, being brought into the Congress is also being discussed, notes a report by Times of India (TOI).

Former information commissioner Harinder Pal Mann (Harry Mann) was in Congress party before joining the Shiromani Akali Dal. He was general secretary of the Punjab Youth Congress between 1980 to 1985. He had quit Congress in 2012. There is already talk of Harry Mann being a probable for the Congress ticket from Samana constituency as the party does not have a claimant there after Jagtar Singh Rajla quit to join AAP. 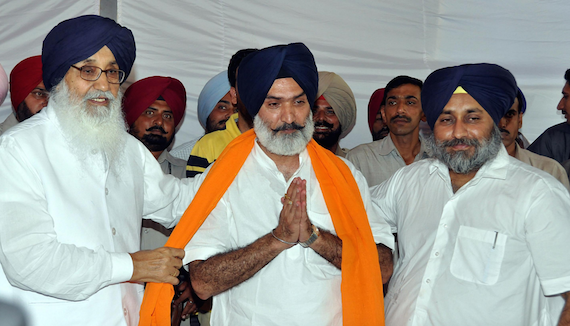 Deepinder Dhillon had unsuccessfully contested the 2014 Lok Sabha election from Patiala on SAD (Badal) ticket. He had been lying low since. He had switched to SAD after he was expelled from the Congress before the assembly election in 2012 after he announced to contest as an independent from Dera Bassi against the party’s official nominee Jasjeet Singh Randhawa.

Balkar Sidhu is said to have held two meetings with Punjab Congress chief Capt. Amarinder over the last week. Notably Balkar Sidhu was announced as AAP candidate from Talwandi Sabo for 2014 bypoll but his candidature was later withdrawn in wake of some allegations against him. He was reportedly not happy with the way AAP had scrapped his candidature and he had not been active in the party since. He had, in fact, fought the byelection against AAP as a rebel candidate.

Meanwhile, SAD (Badal) yesterday expelled its both Deepinder Dhillon and Harry Mann from the party which appears to be a mere formality.