Punjab River Water issue: Fresh tribunal will end up another tool of injustice

Chandigarh: Raising serious doubts over the outcome of the Punjab governments demand seeking fresh tribunal in the apex court to resolve its disputes with non-riparian states over the sharing of its waters, the Sikh bodies feel that given the flawed justice system and dishonest political leadership, the fresh tribunal will also end up as another tool of injustice for Punjab.

Spokespersons of Dal Khalsa and SAD (Panch Pardani) Kanwar Pal Singh and Advocate Harpal Singh Cheema termed the state government’s move as politically incorrect that could only buy the time but not address the core problem. The real fight of Punjab should be to get back its legitimate ownership rights and ironically none of the mainstream parties of the state were concentrating their energy and efforts in that direction. 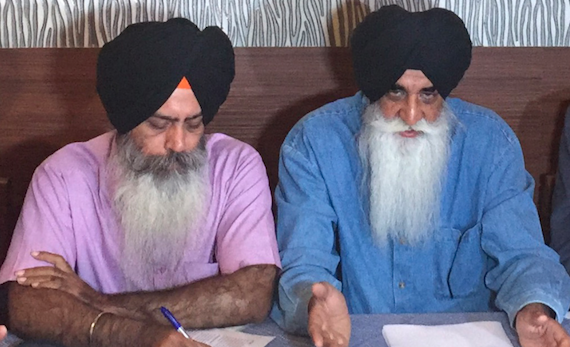 “Do you still believe that Union of India will allow the proposed tribunal to work with fairness and without bias”, they asked CM Parkash Singh Badal. In an another question to Badal, they asked “Is it not political naivety to trust central leadership that has so far denied the ownership right of Punjab on its river waters?

Reminding Badals, they said they said the judiciary and the various tribunals in the past have been erratic and partial in their approach towards the Punjab. The interstate agreement of 1955, the award by Indira Gandhi in 1976 followed by 1981 and Rajiv-Longowal accord in 1985- all were fraud on Punjab, they pointed out.

Reiterating that every drop of Punjab’s river waters must be saved, they said the construction of SYL canal was no more an issue. The real thrust should be on the continuation of flow of waters to non-riparian states that estimates to more than 55 percent of the total waters of Punjab.

Both the leaders were categorical that the root-cause of the problem lies in the sections of 78 and 80 of the Punjab Reorganization Act, 1966 through which the Central government acquires the authority to determine the rights and liabilities of Punjab and Haryana in regard to the Bhakra Nangal and the Beas projects. Ever since late PM Indira Gandhi ‘compelled’ the then CM Punjab Darbara Singh to withdraw the case from the apex court challenging constitutional validity of these provisions, the issue has been left unaddressed by all successive governments of the state, they rue.

Spelling out the agenda for Badal government, they said the foremost tasks before the state legislators was to pass a resolution in the assembly asking the Union government to drop 78 and 80 sections of the Punjab Reorganization Act as these sections were violative of the Indian constitution and side-by-side filing a fresh case in apex court challenging constitutional validity of these sections.

The key to protect the waters of the state was to scrap the clause 5 of the Punjab Termination of Agreements Act 2004 that legalized the loot of waters to neighboring states. Once the flow is stopped, then Punjab can strike a fresh deal with its neighbours on its own terms without any central intervention.

Firing a salvo at mainstream politicians for their double speak, they said strangely from Badals to Amrinder to Bhagwant Mann- all are eager to flow their blood into SYL canal but not waters. Terming these tall talks as fake aimed to woo the voters, they said we all know that when time for sacrifice will come, none from these leaders will come forward, rather will be the first ones to side with the oppressor-state. “These politicians are not the ones, who would sacrifice their lives and career to protect the rights and interests of Punjab”.