Chandigarh: The Punjab Government has sent more than 259 tonnes of food items for the flood-hit people of Kerala, and to ensure proper distribution of the relief material, the state government has also sent a three-member team of the Revenue Department led by Land Records Director Mr Basant Garg. 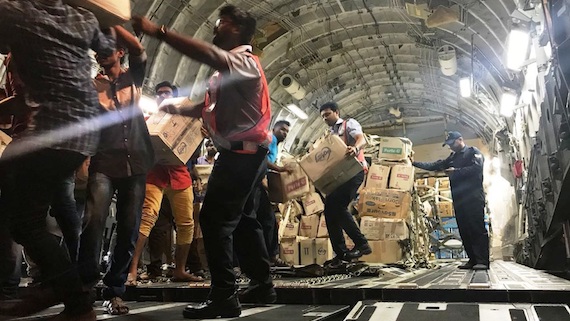 Giving this information Revenue and Disaster Management Minister Sukhbinder Singh Sarkaria said the special team was sent along with the relief material on the directive of the Punjab chief minister, who had also announced Rs 10 crore as relief for Kerala flood victims, out of which, Rs 5 crore had been transferred to the Chief Minister Relief Fund of Kerala and the remaining amount was dispatched along with the food material. He said biscuits, juices, Rusk, sugar, tea, milk powder and water bottles had already been sent through 9 aircrafts.

The CM Captain Amarinder Singh has given an assurance that if required more relief material would be sent to Kerala. The Minister appealed to the people of Punjab to come forward to help in the relief work.

The Additional Chief Secretary-cum-Financial Commissioner Revenue M.P. Singh said the three-member team sent to Kerala also included Tehsildar of Phillaur Tapan Bhanot and Tehsildar of Fatehgarh Sahib Gurjinder Singh. He said the team is deputed at Thiruvananthapuram, and is working in co-ordination with the Kerala Government.