Punjab Unit of AAP at the Verge of Split; Backed by 9 MLAs Sukhpal Khaira Announces Volunteer’s Conference in Bathinda

Backed by these party MLAs, Sukhpal Singh Khaira attacked Aam Aadmi Party’s central leadership and his opponents with in the Punjab unit of AAP.

Addressing media persons AAP’s Kharar MLA Kanwar Sandhu said that nine Aam Aadmi Party MLAs from Punjab have written a joint letter to Arvind Kejriwal and Manish Sisodia against their alleged undemocratic decision to remove Sukhpal Khaira as LoP. He however refused to share the contents of the letter with the media.

“This is an internal matter of the party. We just wanted to update you that what was being done in this regard but we can not share the letter with media”, said he.

Journalist turned politician Kanwar Sandhu said that he has personally urged the central leadership to review its ‘undemocratic decision’.  He insisted that they were still in the Aam Aadmi Party and want to strengthen the party. 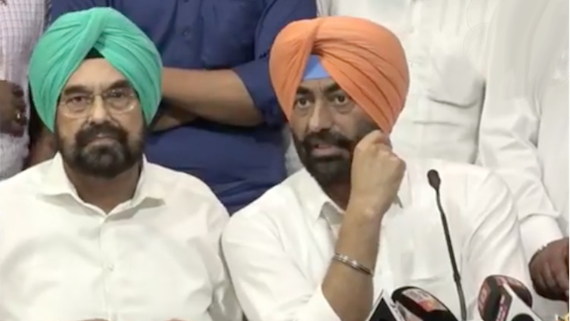 Party MLA from Mansa, Nazar Singh Manshahia said that he, along with some other party MLAs, was trying to sort out the differences between AAP state co-president Dr. Balbir Singh and Sukhpal Singh Khaira but the party’s central leadership did not wait for the outcome.

“I received a call from Manish Shishodia yesterday that the party has decided to remove Sukhpal Khaira as LoP and I should sign and send a letter supporting this decision”, he said while adding that he had urged Manish Shishodia to call a meeting of party MLAs before taking any decision. He said that the central leadership did not pay heed to his request.

AAP MLA from Maur Jagdev Singh Kamalu said that though the central leadership claimed that it had consulted MLAs before taking the decision but the fact was that they were merely informed and not consulted. He said that AAP used to listed to local leadership and volunteers during initial days but now even the MLAs are not being consulted before taking vital decisions.

APP MLA from Jaitu Master Baldev Singh urged the media persons to not to report the press conference in adverse manner while maintaining that it was important for the future of the state.

Addressing the media persons Sukhpal Khaira maintained that he had paid the price of speaking the “truth”. He said that some sections from the party were conspiring against him since he was appointed as LoP. He maintained that demanding his resignation after a Faridkot court summoned him in a drugs case was first manifestation of such a conspiracy. He said that his statement about injustices meted out to Punjab and Sikhs were deliberately twisted to rake up a controversy and hatch another alleged conspiracy against him. He also made mention of his visit and support to Bargari morcha.

He said that he would initiate volunteer’s contact program on Saturday (July 28) from Maur. He added that all volunteers and office bearers of the Aam Aadmi Party will be welcomed at Bathinda conference.