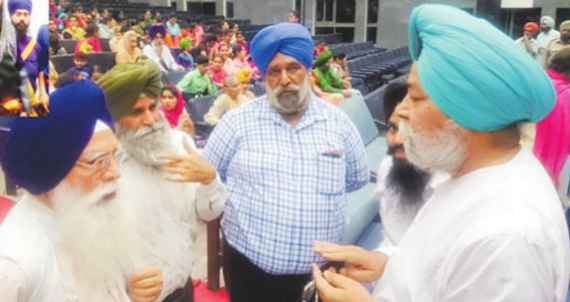 Jagdeep Singh, a student of Religious studies department said that students had objections to the portrayal of Baba Banda Singh Bahadur by an actor. He said that the students had asked the university authorities to remove that part from the play.

“We tired to raise over concerns with the university authorities but the administration failed to respond we were compelled to raise objections publicly”, he added.

The students who had objected to the play said that their only concern was that no actor should play the role of Baba Banda Singh Bahadur, given his status as a great Sikh “Shaheed”. They said that no one should be allowed to play the roles of Sikh Gurus, great Sikh martyrs and spiritual personalities. They, however, said that alternative techniques may be used to showcase or present the Sikh history on stage.

Dr. Malkinder Kaur, head of Guru Granth Sahib Studies Department said that the objections of the students were unfound as the play was approved by the SGPC and SGPC executive member Karnail Singh Panjoli was going to host a show of this play at Fatehgarh Sahib in coming day. She said that the show was “postponed” in Punjabi university in wake of objections raised by some students.

Prof. Harpal Singh Pannu, former head of Religious Studies department said that as per Sikh tenets no one could play role of Sikh Guru and Sikh martyrs. He said that the status of “Shaheed” is very high in the Sikh religion and actors should not be allowed to act as great Sikh martyrs such as Baba Banda Singh Bahadur, Baba Deep Singh and Bhai Mani Singh etc. He, however, added that role of other Sikh personalities such as Maharaja Ranjeet Singh, may be played by actors.

Prof. Pannu said that students were right in raising objections against the show.

Another professor of religious students department said that the restriction regarding acting/portrayal of character should be kept confined to Sikh Guru Sahib only. He said that role of other Sikh personalities, including Shaheeds, may be played by Sikh actors. He said that by raking up such issues, the students were trying to defame the university.

On being asked about allegations that the students were indulging in activities aimed at defaming the Punjabi University, concerned students said that such allegations were baseless.

“Its our University and we are students of this institution. Any harm to the image of University is a harm to our image also but this does not mean that we should turn blind eyes if anything wrongful goes on in the University” a students of Religious Studies Department told SSN over phone.

Historian Dr. Sukhdial Singh said that he was entrusted by the University vice-chancellor Dr. Jaspal Singh to review the script of the play. He said that the script was very well articulated and there was nothing objectionable in it. He said that some “Sikh students” raised some objections just before the show of the play.

“Majority of the students were willing to watch the show, however, some other students were raising some objections. As it was no possible to change the show on the spot the organizers decided to drop their plan to host the show” Dr. Sukhdial Singh, told Sikh Siyasat News (SSN) over phone.

“Baba Banda Singh Bahadur was a political leader like Maharaja Ranjeet Singh and Jassa Singh Ahluwalia and his role may be played by some actor on the stage” said Dr. Sukhdial Singh.

“My personal opinion is that no one can play the role of Sikh Guru Sahibs but there should be no such bar in the case of other historical Sikh personalities”, he added.

On being asked about the status of “Shaheeds” in Sikh panth he said that if the Panth decides that actors should no be allowed to play the role of Sikh Shaheeds then he would agree to that decision.

Sikh youth scholar Prabhjot Singh Nawanshehr said that portraying Sikh Guru Sahibs, great Sikh martyrs and spiritual personalities in physical form was not acceptable under Sikh tenets. He said that the unique and higher status of “Shaheeds” is evident from the “Ardas” itself and students (reference to Punjab University students) were right in raising objections to portrayal of Baba Banda Singh Bahadur by an actor.