Chandigarh: When Indian media platforms hold discussion on the issue of ‘Sikh independence’ or ‘Khalistan’, they include different participants from various political parties that are opposed to each other. This is done in order to create an impression that the platform is impartial as the participants are from diverse parties. But when one analyses their profiles, it comes out that all participants are from one party – i.e. the Indian state.

Even the impartiality of the platform flies away when anchors openly and repeatedly declare that they are staunch supporters of ‘unity and integrity’ of the Indian state and supremacy of the Indian constitution. Indian channels, including regional/Punjabi news channels, seem to have specialisation in conducting such type of “inclusive and impartial” debates. 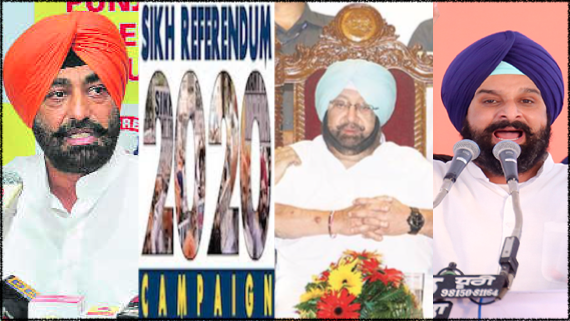 Same drama is being played out once again in Punjab but this time the theatre has changed from TV screens to political stage.

While interacting with reporters in Chandigarh on Friday (June 15) Sukhpal Singh Khaira reportedly said that he supported the Referendum 2020 movement as Sikhs have a right to demand justice against “atrocities” suffered by them. He reportedly said that the groups campaigning for the move are functioning from independent countries and within the law of those countries. As per reports he did not forget to insist that he owes allegiance to the Constitution of India and stood for united India.

Bikram Singh Majithia of Shiromani Akali Dal (Badal) was quick to react to Sukhpal Singh Khaira’s statement. SAD (B) leader in his statement to media on Friday condemned Sukhpal Singh Khaira for indulging into ‘divisive politics’. He said the first agenda of the referendum was to form an independent state for the Sikhs separate from India. He reportedly added that the ‘SAD has been fighting for justice for Sikhs, but no one will be allowed to divide the country’.

Punjab government, led by the Congress party too did not miss the opportunity to play their part. The Punjab Chief Minister and Congress MLAs issued two separate statements attempting to deligimatise the Sikh demand for independence under the garb of ‘condemning Sukhpal Singh Khaira’ for supporting so-termed ‘Referendum 2020’ move.

So, just like TV debates, participants in this political rhetoric move are from different political parties that are otherwise opposed to each other but all represent the viewpoints of the Indian state. Just like one sided TV debates, where the Sikh viewpoint is never accomodated, the conclusions of this episode are also pre-scripted – opposing and demonising the idea of Sikh independence by all means.