Rajnath Singh terming 1984 Sikh Genocide as Mob Lynching is Another Injustice to the Sikhs: AAP

Chandigarh: The Aam Aadmi Party on Saturday opposed the statement of union Home minister, Rajnath Singh in which he stated the Sikh genocide of 1984 as mob lynching and the party termed it as another injustice done to the Sikh community.

In a press statement released from party headquarters, co-president of AAP Punjab Dr. Balbir Singh said that the statement shows how insensitive BJP and Congress leaders are to term the Sikh genocide that shook the world as mere a mob lynching. He said that the Home minister has again made mockery of the innocent Sikhs killed in 1984 with his statement. He demanded that Rajnath Singh must take his words back and apologize to the Sikh community. 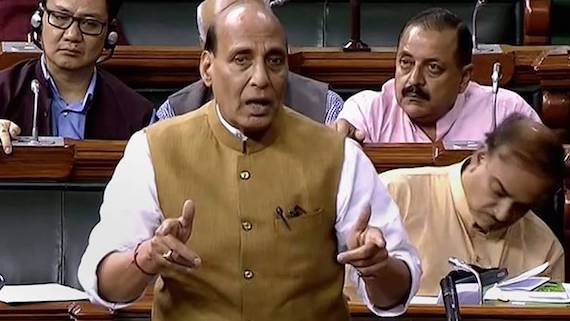 Indian Home Minister Rajnath Singh speaks in the Lok Sabha on ‘no-confidence motion’ during the Monsoon Session of Parliament, in New Delhi on Friday, July 20, 2018.

Dr. Balbir Singh said that not only Congress but BJP as well has always denied justice to Sikh Community and both the parties have played politics over it. He said that the need of the hour is to put the people responsible for Sikh genocide behind the bars but BJP government at centre is also saving the leaders of Congress.

Asking SAD (Badal) leaders Parkash Singh Badal, Sukhbir Singh Badal and union minister Harsimrat Kaur Badal to clarify the statement of home minister about the Sikh genocide, Dr. Balbir Singh said that the power hungry Badals would never say a word against BJP leader just to keep Harsimrat Badal as minister in Modi govt. He said that the Badal must tell the people of state if the statement given by Rajnath Singh in the presence of Harsimrat Kaur Badal has not disturbed or moved them. Dr. Balbir said that if Shiromani Akali Dal  (Badal) boasts of being the only party of Sikhs and protecting rights of the community then they must immediately break the alliance with BJP and oppose the statement of home minister.