New Delhi: The Reserve Bank of India here on Wednesday released its much-awaited report on demonetisation. In the report, it purportedly said 99 per cent of the banned notes came back into the banking system which trashes all the big claims of Indian Prime Minister Narendra Modi that the move will flush out the black money and counterfeit currency.

On November 8, 2016, when Indian PM Modi announced the unexpected, shocking, and to some extent chaotic decision to ban the old Rs. 500 and Rs. 1000 bank notes, he had claimed the move will “break the grip of corruption and black money,” reads the quote from a reported published in an English vernacular. 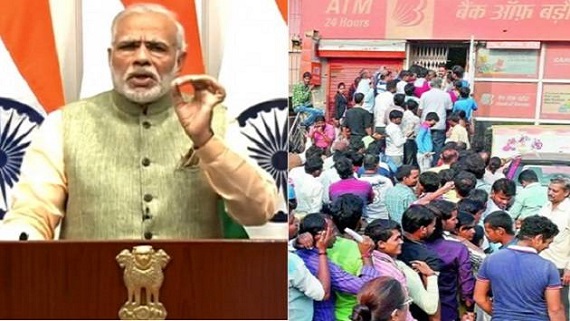 But according to the RBI report, Rs 15.28 lakh crore out of the Rs 15.44 lakh crore in the currency that was ceased to be legal tender on November 8, 2016, has come back into the Indian banking system.

“Subject to future corrections based on verification process when completed, the estimated value of SBNs (specified bank notes) received as on June 30, 2017, is Rs 15.28 lakh crore,” RBI said.

Talking about the counterfeit currency Indian Prime Minister Modi had said, “The 500 and 1,000 rupee notes hoarded by anti-Indian and anti-social elements will become just worthless pieces of paper.”

According to Niti Aayog member Bibek Debroy, the estimated figure of counterfeit currency in 2016 was Rs 2,000 crore but the RBI report said, only Rs. 41 crore of the fake notes discovered over the last one year which again rubbishes his claim.

Narendra Modi  had also claimed that the note ban will curb the terror funding and will break the backbone of terrorism and Naxalism. But the recent US foreign ministry report raises serious questions on Modi’s claim. The report said attacks in India in 2016 increased massively as compared to previous year, media reports said.

According to the reported data released by India’s Home Ministry, Jammu and Kashmir witnessed 54.81 percent increase in terrorist attacks.

However, the Modi government changed the goal posts and said the demonetization was aimed to make India shift from cash economy to digital economy. But the note ban move failed on this front as well, and the RBI data shows that after a surge in December 2016, the digital transactions were at a five-month low in July 2017.

The RBI report has also confirmed what the critics of the government were pointing out when demonetization was announced.

The Opposition had alleged that the move was not planned well and even demanded to roll it back. During the demonetization chaos, as much as 100 people lost their lives in long queues, the Congress termed the decision as “draconian”.

“My sense is the clever find ways around it.” And his senses proved right, the adroit found ways and the so called demonetization ‘mahayagna’ has failed to “purify the country” from corruption, black money, fake notes, and terrorism, reads the statement of former RBI governor Raghuram Rajan on demonetization published in on the official website of News Nation (NN).