Ready for any sacrifice on SYL issue, says Sukhbir Badal

Dhaudhar/Moga: In a written press release issued by Office of Deputy CM, Punjab the Punjab Deputy Chief Minister, Sukhbir Badal said that the Punjab is fully prepared for a sustained democratic and peaceful fight for justice over the critical state issues affecting the destiny of coming generations.

“Interacting with the media [at Moga Sukhbir] made it amply clear that Punjab does not have a drop of water to spare and there is no question of Punjab accepting or implementing any decision which deprives state of its just right under the settled Riparian principle”, the statement reads.

“He reiterated that he was prepared to make any sacrifice rather than allow a single drop of water to flow out of the state”, the statement reads further.

“Lambasting congress, he said that the meek surrender of Punjab’s rights by the state government of this party had resulted in discrimination and meting out of step motherly treatment towards state” Sukhbir added. 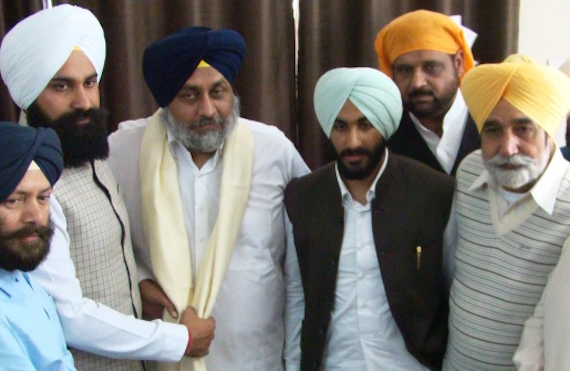 Sukhbir Badal with other leaders of SAD (Badal)

Experts of river water issue say that Sukhbir’s statements about not allowing other states to take away even a single drop of water holds no water as the non-riparian states of Rajasthan, Haryana and Delhi are already getting more than 142 LAF of Punjab’s river water. SAD (Badal) is trying to reduce the issue of Punjab river waters to the SYL canal issue whereas the party has failed to fulfil it’s promise to scrap section 5 of the Punjab Termination of Agreements Act, 2004 that ensures outflow of Punjab’s river water to non-riparian states of Rajasthan, Haryana and Delhi.