Recognize & Respect Riparian Rights of Punjab on its waters: Dal Khalsa to Modi

Amritsar: Dal Khalsa leader Kanwarpal Singh has written an open letter to the Indian Prime Minister Narendra Modi on Punjab river water issue. In this letter the Sikh body has question Indian PM that whether he would take initiative to take the advise of experts of international stature to solve the issue as per “riparian rule”. 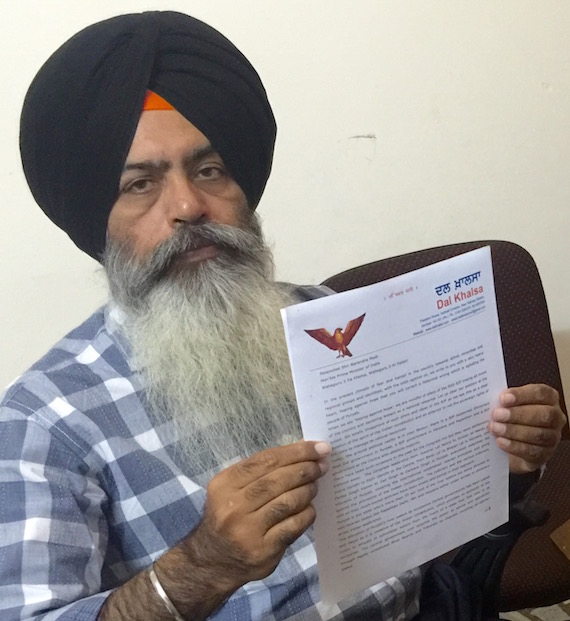 Full text of the letter reads as follows:

An open letter to Prime Minister of India Narendra Modi:

In the present climate of fear and intolerance in the country towards minorities and regional groups and identities, with the odds against us, we write to you with a very heavy heart, hoping against hope that you will correct a historical wrong which is agitating the people of Punjab the most.

When we say ‘hoping against hope’, we are mindful of plans of the RSS-BJP linking all rivers of the country and declaring Waters as a national resource. Let us clear our position at the outset. We totally disapprove of such plans and ideas of the BJP as we see this as a clear attempt to rob the sovereign rights of the state to manage its natural resources.

There have been such occasions in the past for the Congress too but they were deliberately frittered away. The Congress leadership from Jawahar Lal Nehru to Gulzari lal Nanda to Indira Gandhi to Rajiv Gandhi at the Centre and Partap Singh Kairon to Zail Singh to Darbara Singh in Punjab, everybody debunked the interests of Punjab, violating the international established riparian principles and going against the provisions of the Indian Constitution.

During 80’s and 90’s, the role and efforts of Akalis of Punjab remained dubious and detrimental to the interests of Punjab. The judiciary and the various tribunals, with all their much-touted activism have been erratic and partial in their approach. The ‘forced’ interstate agreement of 1955, the award by Indira Gandhi in 1976 followed by 1981 and Rajiv-Longowal accord in 1985- all were fraud on Punjab.

Punjab is the state who’s more than 55 per cent of the river waters are being diverted to non-riparian states like Rajasthan Delhi and Haryana either under duress or chicanery of the Indian leadership.

This allocation of Punjab’s river waters by successive Central governments has been unjust and illegal as it is violative of the Indian Constitution, which provides no authority to the Union to allocate or administer waters from the rivers of a state that flow only in its territories. The central government only acquires the power to advise and adjudicate through legally constituted River Boards and Tribunals on disputes involving co-riparian states.

Rajasthan- a non-riparian state is receiving 10.5 MAF water from Punjab Rivers. Rajasthan is not even part of the Indus basin. Similarly, Haryana is getting 7.8 MAF of waters, while before the reorganization of the states in 1966, Haryana region was receiving only 0.9 MAF. When the state of Madras was bifurcated, it lost all rights to the waters of the Krishna and Panner rivers because the river flowed only in the Andhra region.

With the continued loot of waters, Punjab has become bereft of its rivers and even the underground water is becoming fast depleted. Punjab’s agriculture is in doldrums. Approximately fifty-two per cent of our farmers are small and marginal and they have less than two-and-half hectares. We are everyday witnessing with pain and concern, small farmers committing suicides in the last few years.

We determinedly reiterate that the people of Punjab will not allow the construction of the SYL canal. The contentious Canal, one of the key issues of the Punjab problem, led the state to many long-winded agitations. Clearly, the canal was planned against universally accepted Riparian principles with an eye on looting the scarce water resources of Punjab.

Punjab owned waters of the Sutlej, Ravi and Beas and no legislation could deprive the state from its right of ownership. In the past, Punjab used to get royalty from Rajasthan and Pepsu for water supplied to these two states through Gang canal & Sirhind canal, respectively. Rajasthan and others owe Punjab billions of rupees for the water received for more than 50 years now. Punjab is well within its rights to ask for due royalty for the water that has flown and still flows to all the non-riparian states.

The moot question is, “Can you catch the bull by its horns? Can you take the whole issue in perspective, involve impartial international water experts and come up with a solution based on riparian principles.

To wit, the Indian Union bypassing principles and practicing vote bank politics, created a Frankenstein monster while taking steps for waters allocation and distribution. Along the stretch and beyond of the SYL canal, the lives and economy of millions of people has been seriously affected. The occupants of the seat of Prime Minister, through the last decades played petty politics and muddled the issue irreparably. As you are presently occupying the same seat and office, more than anybody else, it is for you to take political and moral responsibility to set the clock right and put the monster back into the box before it does more damage than what has been done so far.