UK: West Mercia Police is appealing for assistance from the public in identifying the person whose remains were discovered close to M54 in August.

Following a lengthy investigation, police have been able to establish more details about the person including a full DNA profile.
The remains were discovered at the bottom of an embankment off the slip road at junction 4 of the M54 motorway Telford, Shropshire on Thursday 20th August 2015 by a highway worker who was surveying the embankment.

From investigations so far, it has been established that, the person deceased was:

It has been established that he was wearing a black ‘dare2be’ soft shell outdoor jacket in a large size, a navy blue V neck t-shirt George at Asda in a small size and a pair of dark coloured Nike tracksuit bottoms in size medium. (An image of a similar jacket, along with the dare2be snowwear logo is attached) 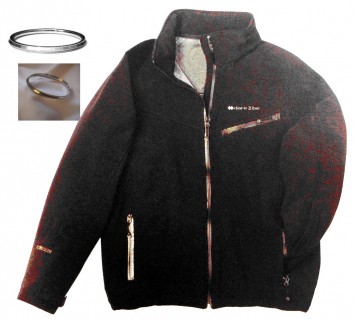 Belongings of a per whose remains were in UK

Enquiries into the t-shirt have established that specific type of t-shirt was first manufactured in November 2007 and first sold in March 2008. The t-shirts were sold at an Asda store within the region where the remains were found.

Furthermore, two metal bracelets were found within the clothing. One has been identified as potentially a ‘Kara’ bracelet predominantly worn by those of a Sikh religion. However, police remain open minded to the fact that anyone could wear such bracelets.

Enquiries into his dental records show he was missing an upper left central tooth, which has been replaced by a special type of dental bridge known as a ‘Rochette’ bridge.

Over the past two months, a painstaking and detailed search took place using specialist search trained officers, forensic archaeologists and anthropologist, botanists and forensic investigators. Due to the nature of the terrain this search took a considerable time to complete, but it has now been satisfied by the Warwickshire Police and West Mercia Police Major Investigation Unit that everything has been recovered.

DCI Neil Jamieson, who is leading the investigation said, “I am very keen to get members of the public to assist me and my team in identifying this individual. It has taken some considerable time for us to piece together a description of this individual. We have been working closely with the National Crime Agency, forensic experts including anthropologists, ondontologists and the forensic pathologist.

“This is a very challenging investigation; we have obtained a lot of information however, we still do not know who this person is. We have managed to obtain a full DNA profile of this man and I am keen to ensure that anyone who thinks they may know who this is to contact us.

“Since this discovery we have been contacted by a number of people regarding missing individuals. Some of whom have never been reported missing to the police.

“At this stage of the investigation we are still unable to ascertain the cause of his death. We are keeping an open mind as to how the man came to be in such a location and how he died, however, I can not rule out that he may have been subjected to a crime, and that is something the public can help me with.

“The metal bracelets are obviously a line of enquiry and as such we have been in contact with our Sikh community, locally, to share this and again ask for any information as to who this man is. It is essential that we do all we can to identify him and return him to his family and loved ones.”

West Mercia Police have also been working closely with the Missing Persons Bureau, and obtaining data from police across the country in an attempt to identify this person. Local enquiries have included providing information to the dental profession in relation to the dental work this man has had.

If anyone has any information regarding the identity of this man or has information which will lead us to identifying him please contact us by calling 101 and asking for the West Mercia Police and Warwickshire Police Major Investigation Unit at Telford, Shropshire.
Call the independent charity crimestoppers anonymously on 0800 555 111 or by visiting the website.