Senior Advocate Mohit Mathur and Manisha Bhandari represented the accused in the court. The court has called the investigating officer for his report and fixed the matter for hearing on July 20.

Both the lawyers argued before the lower district Court and presented their respected cases by stating that the petitioners have already spent 35 years of their life in litigation and have already served one life sentence in Pakistan. The instant is a classic example of double jeopardy… their entire life will go facing trial after trial for one set of circumstance….their should end to their agony. They were first tried for hijacking in Pakistan and sentenced thereafter they were again tried for same incident by Indian Court, and discharged now you can’t change the denomination and try for the same incident under a different name… it is per se illegal, reads the quote from a press note issued by Dal Khalsa. 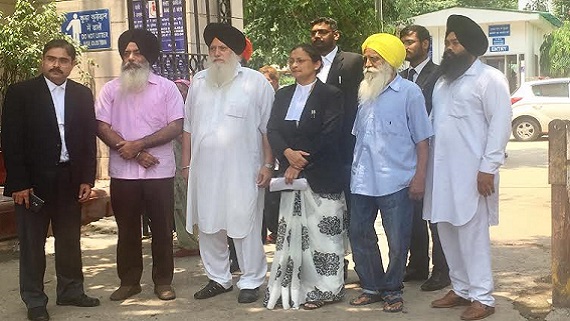 The Delhi police have filed a supplementary challan (fresh charge sheet) in Delhi court on 29 Sep 2011 under sedition charges, which asked the accused to appear before the court on July 18 for a fresh trail in 36 years old case.

Accompanying the Sikh activists pro-freedom Sikh group Dal Khalsa here on today stated that there has been travesty of justice in the case of the activists, against whom the Indian government has put them on trial after 36 years under “sedition charges”, ignoring their life imprisonment in Pakistan for the same offence.

”We strongly take serious note of New Delhi’s move to upset the home and hearth of two of the five hijackers, Satnam Singh and Tejinderpal Singh, who have since returned to Punjab and are peacefully living a dignified life after their long and scary prison sentences. The other three hijackers, Gajinder Singh, Jasbir Singh and Karan Singh, are staying abroad because of the circumstances prevailing in India.”

As an afterthought in 2011, the Delhi Police has filed charges under sections 121 (waging war against Government of India), 121A (conspiring to commit certain offences against the state), 124A (sedition) and 120B (criminal conspiracy) of the Indian Penal Code against the five.

It is pertinent to mention that Flight IC-423 was hijacked on September 29, 1981, to the Pakistan city of Lahore after it took off from Delhi for Srinagar via Amritsar. The activists associated with Dal Khalsa demanded the release of Sikh preacher and head of Damdami Taksal Sant Jarnail Singh Bhindrawale who was arrested on Sep 20 the same year in a murder case.