Amritsar/ Chandigarh: Dal Khalsa has condemned the arrest of former Delhi University lecturer S.A.R. Geelani under sedition charges for allegedly organising an event on February 10 to commemorate the death anniversary of Afzal Guru at Press Club of India.

Calling Prof Geelani as a friend of Sikhs, they said, he was being targeted because while sitting in New Delhi, he strongly speaks in favour of Kashmir cause and also sympathize with other struggling minorities and oppressed peoples. 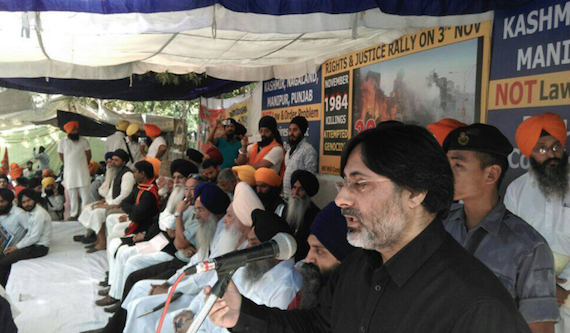 Referring to the JNU students crackdown and the hooliganism shown by BJP MLA and lawyers against JNU faculty members and media persons at Patiala House courts, they said the Hindutva forces were trying to instil fear psychosis in the minds of those who do not subscribe to their so called ‘brand of patriotism’.

“The BJP was back to the business of polarizing the society; this time around with more zeal and vengeance as they have (Indian) states might at its disposal”.

Seeking the dropping of seditions charges against Prof Geelani and JNU students union president Kanhaiya Kumar, they rubbish the notions of Home Minister Rajnath Singh and other BJP leaders that events to remember or hail Afzal Guru and Maqbool Bhutt as a martyr could pose threat to peace and India’s integrity.

As the RSS-BJP has communalized the polity in a sinister way, it’s time for the higher judiciary to intervene before the situation turns volatile and ugly, they observed.