Rise of AAP ” is a ray of hope for saving Sikhi? I disagree [Letter to the Editor]

There any some people who are saying that rise of AAP ” is a ray of hope” for saving Sikhi.There was also a article to thsi affect on an online Sikh news portal. I would like to challenge this thesis. 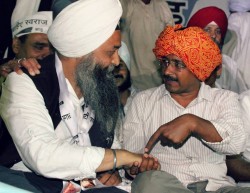 1. I believe even though the AAP has a number of good things and intentions but at its very core AAP is a nationalistic Indian party which believes in one Indian nation and betterment of “INDIAN” people within the constructs and confines on Indian Constitution. Its nationalistic nature becomes quite evident when Kejriwal starts his victory speech with the slogan of “Bharat mata ki jai” and “Vande Matram”. The nature of these slogans and what they depict of the psych of the folks making them to me is quite evident. The fact that they are not called “Hindu Nationalists” like the BJP and RSS does not make them any less nationalist. Now if one contend that Sikhs are safe and will do well in India within the constructs of its constitution and Sikhi with its “unique” nature can flourish under those confines then it is a different matter.

2. Even as a mere political matter, AAP, I believe is no different than other socialist parties which intend to level the playing field and to do that increase government’s role in giving out doles like free electricity, water, jobs. This can be good for the some folks in India whether its good for Sikhs and Sikhi is another matter. Sikhs by their very nature and Sikhi by its definition draws strength for Waheguru and does not depend on governments. Governments which intend to give and level playing fields do so by controlling peoples aspirations.

3. The people controlling the AAP functioning are upper class Hindus with idealistic believes which is no different than any such movements in India previously be it congress when it started or Jai Prakash Narain movement in its hey days. These movements eventually falter and are never good for people who have any sense of independence like Sikhs have and always will. So the moments any Sikh talks about independence or even autonomy from the central Indian state AAP will not accept him and in fact will reject him.

Finally I believe Sikhs and Sikhi is created by Guru Maharaj and he will be the one saving us and we should all say Ardas to him.