Sacramento: The Gurdwara Sahib Sacramento hosted a conference on the life of Banda Singh Bahadur on Saturday, June 11th, featuring Dr. Jaideep Singh, Navkiran Kaur Khalra, and Dr. Amrik Singh. Banda Singh Bahadur (1670-1716) was a Sikh martyr during the Moghul occupation of Punjab and has become a symbol of the Sikh’s three hundred year long struggle for sovereignty and independence. During the event the speakers offered remarks on Bahadur’s life and the current plight of Indian minority communities in India and the United States.

The event’s first speaker, Navkiran Kaur Khalra began her presentation with cases of violence, discrimination, and crimes against low-caste dalits. Kaur contends that that the issue of caste remains the chief problem in India – a position that she shares with the Sikh gurus and Banda Singh Bahadur. Faithful Sikhs, collectively called the Khalsa, reject any form of caste distinction and have fought for the equality of all people, including women.

The Sikh struggle for social equality was noted by 18th century Jesuit missionary Father Xavier Wendell, says Khalra. On his experience with the Sikhs in Northern India he wrote, “This strange confusion and mixture of persons of all castes and extractions among the Sikhs of today, a thing so abominable, and until then unknown to the gentiles of Indostan.” 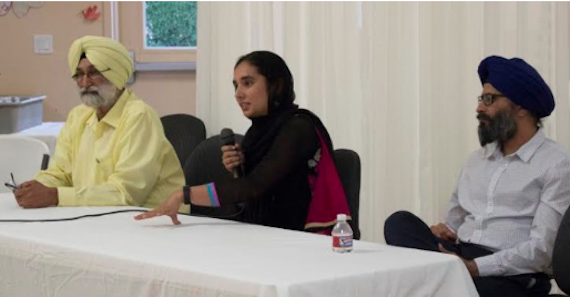 Navkiran Kaur Khalra’s family has a pedigree as advocates for human rights and equality. Her father Jaswant Singh Khalra was disappeared and killed by Indian police in September 1995 after he exposed India’s secret genocide of Sikh youth in Punjab. Her great-grandfather Harnam Singh was involved in the Ghadar Party, a Sikh California-based organization that sparked the movement for India’s independence from the British.

Dr. Jaideep Singh offered remarks on American Sikhs and the discrimination they face in the United States. Dr. Singh helped to co-found the Sikh American Legal Defense Fund (SALDEF) in 1996 and currently teaches Ethnic Studies at California State University, East Bay. “The Sikhs are subjected to discrimination because of these visible symbols of our faith: the turban, our beards, and our language,” says Singh.

These visible articles were established during the Guruship of Gobind Singh and passed on through Banda Singh Bahadur’s Khalsa as essential elements of Sikh religious identity. Dr. Singh enumerated the attacks on Sikhs in the United States while noting that, “California may be the most dangerous place to live as a Sikh American.” Statistics for hate crimes against Sikh communities show that most attacks occur in communities with large Sikh populations like California and New York. More than a quarter of all American Sikhs live in Central California, which is also home to the first Sikh Gurdwara in Stockton founded by the Pacific Coast Khalsa Diwan Society in 1912.

The conference was keynoted by Dr. Amrik Singh, who presented on Banda Singh Bahadur’s legacy and how his life marked a turning point in the history of South Asia. “Bahadur was able to translate the Guru’s concept of Sikh sovereignty into a political form,” said Dr. Amrik Singh. Remarkably, Dr. Singh points out that the Sikhs call for equality and the abolishment of feudal social systems came nearly a century before the French and American revolutions. “Banda Singh Bahadur took vows and received amrit from Guru Gobind Singh Ji,” explained Singh. “And after the Guru’s death, Bahadur established a state to protect the religious community from the oppression of the Moghuls.”

The event was sponsored by the Gurdwara Sahib Sacramento, Sikh Information Centre, Organization for Minorities of India, and the Dr. BR Ambedkar Sikh Foundation.