Sacramento, CA: Genocide against minorities in India was a front-row topic at a Sacramento rally held on Friday in support of a Sikh hunger-striker.

Bapu Surat Singh Khalsa, an 82-year-old permanent resident of the U.S who lives in Lathrop, CA, has been on hunger-strike in Punjab, India since January 16 to demand freedom for Sikh political prisoners held past their sentences. On May 22, Sikhs joined local Christian communities for a rally in his honor at the California State Capitol. Bapu Surat Singh also found support from the state assemblymember representing Lathrop.

Bapu Surat Singh Khalsa’s daughter, speaking on the steps of the capitol, said: “Do you guys know why he is doing this? He’s doing this for humanity, for human rights, for those people whose human rights have been violated in Punjab and in India. Those political prisoners who fought for their beliefs.” Most of the prisoners, she pointed out, were sentenced to 14-year terms but have now spent 25 years or more behind bars despite completing their sentences. 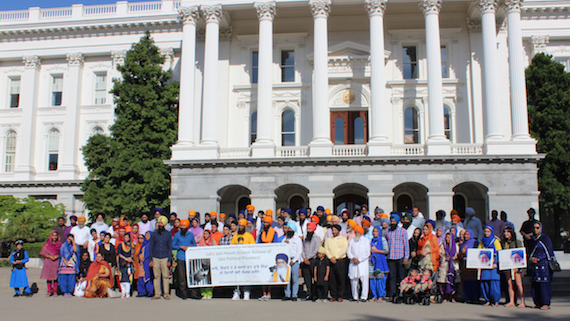 Supporters of Surat Singh Khalsa pose after the May 22 rally

As two young Sikhs unfurled a banner behind him reading, “Let’s join hands to seek release of Sikh political prisoners,” Assemblymember Susan Eggman’s Chief of Staff David Stammerjohan took the mic. Apologizing for Eggman’s absence, he remarked: “Susan feels a strong affection and connection to the Sikh community. The reason she feels such a strong connection is the commitment of the Sikh community to human rights.”

Eggman co-authored ACR 34, a resolution passed by both houses of the State Legislature in April to recognize the 1984 Sikh Genocide. Noting that the genocide “claimed the lives of thousands of Sikhs throughout India,” the resolution says, “Government and law enforcement officials organized, participated in, and failed to intervene to prevent the killings.”

Telling demonstrators to “keep up the great work,” Stammerjohan stated: “If we can’t have political expression, if we can’t stand up and criticize government policies, then we don’t have human dignity. That’s essential to be able to express dissent to government. That’s so much what you’re about and what you’ve been talking about here today, and I just want to thank you for that on Susan’s behalf.”

After the 1984 genocide, Bapu Surat Singh Khalsa spent years in the northern Indian state of Punjab organizing protests and was arrested multiple times for his activism. He immigrated to the U.S in 1988 after being wounded during unprovoked firing by police at a peaceful demonstration outside the Punjab Legislative Assembly. In early January of this year, he traveled to India to begin his hunger-strike, and in February, he was arrested and force-fed by Indian police for 56 days, but released in April after seven California congressional representatives joined a letter on his behalf.

As his daughter Mandeep explained at the rally, Bapu Surat Singh Khalsa’s health is now failing: “He has a fever. He has a urine infection. He’s lost most of his ability to speak…. He needs to be carried from one place to another. He’s not able to take a bath on his own. A majority of his time, 24 hours a day, his time is spent laying down on the floor or on the bed. So, this is the kind of condition he is in. So, Bapuji’s clock is ticking.”

After the rally, Bhajan Singh of Organization for Minorities of India (OFMI) commented, “Most of the political prisoners for whose freedom Bapu Surat Singh is hunger-striking were arrested in the 1980s and 1990s for dissenting against the Indian State’s sponsorship of genocide.” Speakers repeatedly highlighted that connection, including social justice activist Punit Kaur Khalsa, who said: “This current struggle is another facet of that greater battle to achieve justice in a place where ethnic and racial minorities are subjugated to governmental exploitation, human rights abuses, and unlawful killings.”

“We’re going to get congressmen to stand beside us and say that we acknowledge that these things happened,” remarked Jada Bernard from the capitol steps. To applause, Bernard, an advisor to OFMI, exclaimed: “1984 happened. 2002 happened…. We’re standing here today because we say they’re not going to happen again.”

Father Joshua Lickter of Incarnation Anglican Church said he was new to the dialogue. “Like many Americans, I operated under the presumption that India was an ally and was a democracy just like the United States,” commented Fr. Lickter. He said he decided to dig deeper, noting: “I have colleagues who have churches, not unlike mine, in India, and they have experienced persecution. Their churches and communities have been vandalized. They have been attacked and threatened. And that doesn’t mesh with what we’ve been told and the image that we’ve seen here in America concerning India.”

“As I’ve heard the plight of Bapu, I am humbled,” continued Lickter. “Historically, other people in his shoes have taken up arms against their oppressors. But what does he do? His faith teaches him to love those around him. To love the people who are persecuting him…. So he can’t raise up arms against them. So what does he do instead? He takes it upon himself. He starves himself because he himself is starving for justice.”

Sikhs came from across California to join the rally, hailing from gurdwaras in West Sacramento, Stockton, Turlock, Fremont, San Jose, and other regions. With cheers, applause, and the traditional Sikh cry of “Bole So Nihal: Sat Sri Akal,” they focused for an hour on speakers that also included Ajay Singh, Kulbir Kaur Bainiwal, Gurneel Singh Boparai, and Sandeep Singh. Steve Macías, who emceed, remarked: “Isn’t it wonderful that we can all be out here together to represent a single cause?”