Badal Dal asks Arvind Kejriwal: What happened to the eight lakh jobs he had promised to Delhi youth?

Chandigarh: The Shiromani Akali Dal (Badal) today asked Aam Aadmi Party (AAP) Convenor and Delhi chief minister Arvind Kejriwal what had happened to the eight lakh jobs as well as a slew of other promises he had made to the youth of Delhi and never fulfilled just like he had lied, duped and betrayed each and every section of the Delhi populace.

Asking Kejriwal with what face he was approaching the youth of Punjab tomorrow, SAD secretary and spokesman Dr Daljit Singh Cheema said “It is better you come out with a factual report card tomorrow and explain what you have done for the youth of Delhi before releasing another fake document in Punjab under the name of youth manifesto at Amritsar tomorrow. 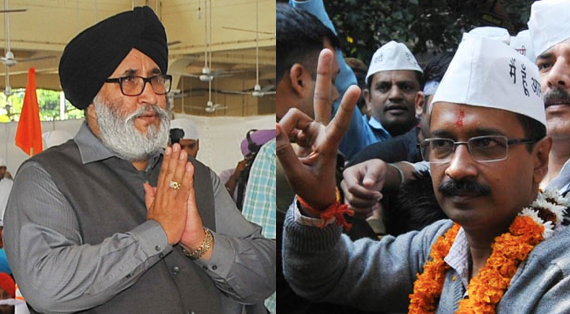 Stating that now Arvind Kejriwal was on a mission to hoodwink the youth of Punjab in the same manner in which he had fooled the Delhi youth, the SAD leader said “you will however never succeed in this con game as Punjabis have seen through you repeated lies and betrayals”.

Stating that Punjab youth had already become aware of Kejriwal’s turncoat ways and knew how he had deceived the farmers of the State by first promising support on the SYL canal issue and then reneging on this promise and siding with Haryana, Dr Cheema said instead of coming out with more hollow promises Kejriwal should come clean on what he had done for Delhi youth. “This will allow the youth to judge him for what he is – an anarchist who wants to destabilise the system rather than build it”.

Speaking about the various promises made to the youth by AAP in Delhi, the party spokesman said Kejriwal had promised to create eight lakh jobs for youth in Delhi besides providing vocational training to ten lakh youth. He said Kejriwal had also promised Wi-Fi across the national capital, opening 500 new schools and twenty new colleges besides creating new stadia and sports infrastructure in the villages of Delhi. AAP also listed in its election manifesto that it would double the existing seats in colleges in Delhi, open incubation centres in the colleges and assure easy educational loans with the government standing guarantee for them. It also assured to create 50,000 vacancies for doctors, teachers, nurses and other professionals.

Dr Cheema said even as none of the promises listed in the AAP election manifesto had been implemented, Kejriwal set aside Rs 550 crore for his self-publicity in Punjab and other States of the country. “In this way the tax-payers money of the residents of Delhi was spent to fulfil the megalomaniac ego of one individual”, he added.

The SAD leader said everyone knew the state of today’s Delhi. He said it was for the first time in the history of the State that the entire civil administration went on mass leave to protest against Kejriwal’s whimsical actions. He said this was not all. The capital became a garbage dump after corporation employees went on repeated strikes because they were not paid their salaries and arrears. He said senior leaders of AAP were found on the wrong side of the law. Law minister Jitender Singh Tomar was arrested for possessing a fake degree. Environment minister Asim Khan was sacked over bribery allegations. Senior leader Kuman Vishwas was accused of molesting a woman. Even the office of Kejriwal’s principal secretary Rajendra Kumar was raided by the CBI in connection with a corruption case.

Dr Cheema said against this report card of mis-governance and planned confrontation with the centre which was spreading anarchy in Delhi, there was the pro-youth record of the SAD-BJP government. He said the alliance government had already given 1.25 lakh jobs to youth and the process of giving another 1.20 lakh jobs was on. He said the government had added 13 more Universities in the State besides 30 new Colleges to make Punjab an educational hub in the northern region. Dr Cheema said besides establishment of Punjab Institute of Sports with eleven sports directorates, ten flood lit multi-purpose new stadiums had come up while ten others had been upgraded to international level. He said six new synthetic hockey surfaces had been laid besides establishment of 4,000 gym centres in towns and villages and distribution of 6,940 multi-gyms and 23,553 sports kits. He said the process of setting up 200 new skill centres was on with some already having starting skill training to youth.

The SAD leader said in the light of this mounting evidence it would be appropriate to advise Kejriwal to go in for a course correction. “One needs to understand the needs of the youth and make sincere steps to address them. Instead of doing this all you have done till now is to instigate the youth of Delhi to rise up against the centre. You should know that in a federal structure the State and Union have to work in tandem with each other. But is seems this advice will be wasted on you as you have proved that you are not capable of delivering anything except anarchy. In such a situation, it becomes incumbent on you to prove your credentials to the youth of Punjab by listing the work you have done for Delhi youth rather than trying to mislead them and creating mischief in a sensitive border State”, he added.