Chandigarh: Aam Aadmi Party (AAP) has condemned the brutal assault on protesting linemen and their families including women and children to get their right in the Shiromani Akali Dal (SAD) rally at Takht Sri Damdama Dahib at Talwandi Sabo.

Expressing anguish at the insensitive and inhuman treatment of helpless women and children who were appealing to the ruling SAD govt for their genuine demands, Incharge Punjab Affairs Sanjay Singh and Punjab AAP Convener Sucha Singh Chhotepur said the action of the police was Barbaric and uncalled for.

On the occasion of a popular religious festival like Baisakhi it was extremely insensitive of the govt machinery to ruin the festive spirit with which people had gathered. The police and SAD workers have crossed all limits and forget the teachings of Sikh Gurus who have advocated to raise voice to get one’s due. 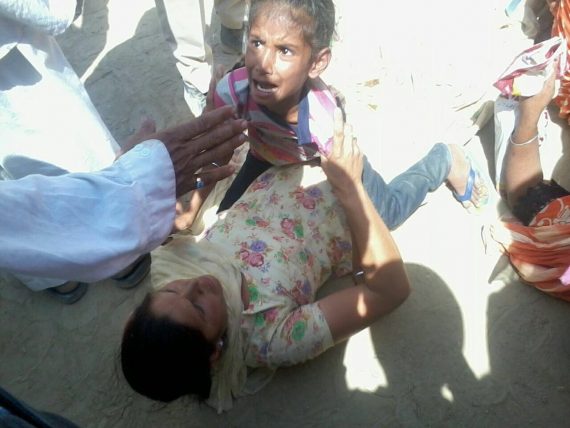 Another view of lathicharge outside Badal Dal conference at Talwandi Sabo

“The brutal treatment marred the occasion and showed the insensitivity of the Akali leadership who sat watching the lathi charge from their stage”, said Sanjay Singh.

On Sukhbir Badal’s announcement of giving jobs to 1.2 Lakh youth in coming month, AAP leader and Sangrur MP, Bhagwant Mann said, “ Sukhbir has nothing else to do except lying, he should focus on solving issues of those who are protesting rather than making false promises.”

“Sukhbir is so power drunk that couldn’t even listen to the cries of children and women who were being thrashed brutally by his police” Mann said. “The case of damaging public property has been lodged against the peaceful protesters, what damage have they done by raising their genuine demands?” asked Mann.

On Sukhbir calling ‘Topiwals’ to the protesting linemen, Sanjay Singh said that Sukhbir is so horrified by the AAP wave in Punjab that anyone and everyone who raises his voice against the anti-people policies of Akalis and demands for their right is being seen as AAP supporter.

“Atleast Sukhbir has accepted that AAP always stand by the people whose rights are curbed by SAD government, we will always be there where there is need to raise the voice against wrongdoing of Akalis” Sanjay Added.