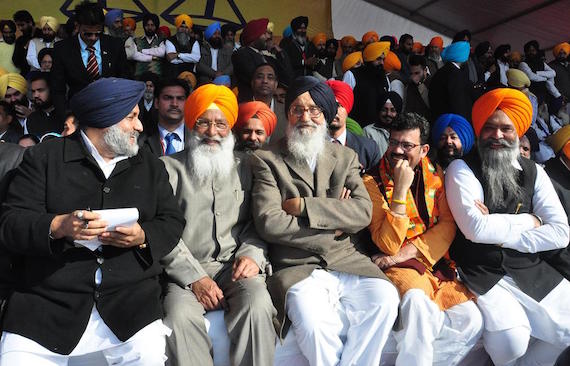 A view of gathering during Badal Dal’s conference

The Department of Information and Public Relations (PB) has issued a press note regarding the rally, which is being shared as follows for the information of readers of the Sikh Siyasat News:-

The Chief Minister said that the coronation ceremony of Captain Amarinder Singh at Bathinda still reflected his ‘monarchical psyche’ even in the post independent India. He said that in democracy the words like coronation have no place but Captain’s this initiative reflects his ‘aristocratic mindset’. Taking a swipe at the State Congress Chief, Mr. Badal said captain still feels pride in getting to be addressed as ‘Maharaja sahib’.

Terming the Congress as enemy number one of Punjabis particularly the Sikhs, the Chief Minister said that it was unfortunate that Captain was feeling proud to be anointed as the President of this party which has done grave injustices to the state. He said that none of the Punjabi could ever forget that the Congress has deprived the state of its capital, Punjabi speaking areas and legitimate share in river waters besides tormenting the Sikh psyche by attacking Sri Darbar Sahib and killing thousands of innocent Sikhs during 1984 Sikh carnage. Mr. Badal said that Captain was once a sworn Akali but due to his lust for power he had joined the Congress. “It is sad that Captain was feeling proud to be appointed President of Congress, who had perpetrated these heinous crimes against the Sikhs” added Mr. Badal.

The Chief Minister said that while the Congress has always tried to derail the development in the state, Punjab has witnessed tremendous growth during SAD-BJP alliance government in the state as well as centre. He said that Punjab got several key projects during the rule of the Vajpayee government and now also the state was getting its due share during the incumbent NDA government. Mr. Badal said that within a year of the formation of the NDA government at centre the state has been immensely benefitted from it. He that the state has got key projects like AIIMS, Post Graduate Institute of Horticulture Research and HRIDAY status for holy city of Amritsar.

Addressing a gigantic gathering during sadbhavna rally the Deputy Chief Minister S. Sukhbir Singh Badal today pooh pooed the boasts of PPCC chief Captain Amarinder Singh about returning to power in 2017 and announced that SAD-BJP government perform hat trick by winning the 2017 polls. He said Captain would face defeat third time which would send him into political exile forever. He advised Captain to take world tour and go for leisure activities as is his habit and fulfill his kingly desires for whom he has got real liking.

Coming down heavily on the Gandhi family, the Deputy Chief Minister said that this family has never taken kindly to Punjab and is the sworn enemy of Sikhs in Particular. He elaborated that while Indira Gandhi attacked Sri Akal Sahib and her son Rajiv Gandhi was responsible for ethnic cleansing of Sikhs in 1984. S. Badal informed that now Rahul Gandhi wants to take political mileage out of the unfortunate incidents of sacrilege and farmers issues. Sounding the warning note, S. Badal said that he won’t allow the peaceful atmosphere of the state to be vitiated by these tactics. Terming SAD as a party of martyrs he said that the party would stand like a rock before the evil designs of congress to create trouble and disrupt peace.

Challenging the Captain to showcase a single development measure carried out during his regime, the Deputy Chief Minister informed that in sharp contrast to the anti-people policies of the congress tyrannical rule, the SAD-BJP government under the dynamic leadership of Chief Minister S. Parkash Singh Badal has taken a slew of measures for the upliftment of all the strata of society including economically weaker sections, farmers, traders and people in the twilight of their lives.

Listing the achievements of the SAD-BJP government, he said that the government had rapidly taken the state on the road to progress in every field be it the strengthening of road infrastructure, tackling unemployment by soon advertising around over 1 lakh jobs and bringing investment worth Rs. 1 lakh crore through recently concluded 2nd Progressive Punjab Investors Summit at Mohali.
He also announced that the streets in all villages in the state would be cemented in next 5 years at a cost of Rs. 15000 crore. Divulging more, he said that 1.5 lakh tubewell connections would be released to the farmers in next 6 months besides giving all basic amenities to all towns at a cost of Rs. 4000 crore.

In his address former Union Minister and Rajya Sabha MP Mr. Sukhdev Singh Dhindsa said that the sacrilege incident had bruised the psyche of every human being but unfortunately the Congress tried to score political mileage by helping the radical forces. He said that Congress had a notorious past of pursuing divide and rule policy to attain power. Taking Aam Aadmi Party (AAP) to cudgels, Mr. Dhindsa also said that AAP was itself a divided house which was befooling the people through hollow slogans.

In his address Lok Sabha MP Prof Prem Singh Chandumajra said that Punjabis especially Sikhs could never forgive Congress for attack on Sri Darbar Sahib and Sikh Carnage of 1984. He also recalled the glorious role of SAD especially Chief Minister Mr. Parkash Singh Badal in promoting the ethos of peace and communal harmony besides safeguarding the interests of farming community.
In his address National Secretary of BJP Mr. Tarun Chugh said that Congress party has rewarded Amarinder with Captaincy of state Congress for hatching a conspiracy to disturb law and order situation in the state. He said that Captain’s hypocrisy has been exposed by the fact that he accepted the president ship of the same party which he termed as cruel while resigning from it in 1984. Reminding the people about oppressions of Patiala royal family before independence, he said that SAD – BJP alliance would never allow the tyrant successor of this lineage to destroy future of state.

In his address state BJP chief Mr Kamal Sharma said that Sadbhawana rallies were successful in cementing the ethos of brotherhood in the state. He said that Congress party’s policy of divide and rule has put the country on boil. Mr. Sharma said that in Punjab also Congress was pursuing the same policy to disturb hard earned peace of state. However, he said that the brave and wise people of state would thwart the nefarious designs of Congress.

On the occasion education Minister Dr Daljeet Singh Cheema conducted the proceedings of Sadbhawna rally and profusely thanked the people for enthusiastic participation.