Chandigarh: A day after state finance minister Manpreet Badal stated that the state government had fulfilled 125 of the total 428 promises listed in the poll manifesto of the Congress party, the Shiromani Akali Dal (Badal) today condemned him for “lying” on the sacred occasion of Maghi at Muktsar. The opposition party has asked Manpreet Badal to specify the promises as he seemed to be fulfilling them on paper only.

In a statement here, SAD (Badal) leader Bikram Majithia expressed shock while maintaining that “Manpreet Badal had tried to befool and deceive Punjabis at a conference held to pay tributes to the 40 martyrs who sacrificed their lives for the Sikh panth”.

“I don’t know from where the finance minister has pulled out the 128 figure. He should specify if these promises have resulted in extension of any benefit to Punjabis. If not he should apologize to the people for lying to them on a sacred occasion”, Bikram Majithia said. 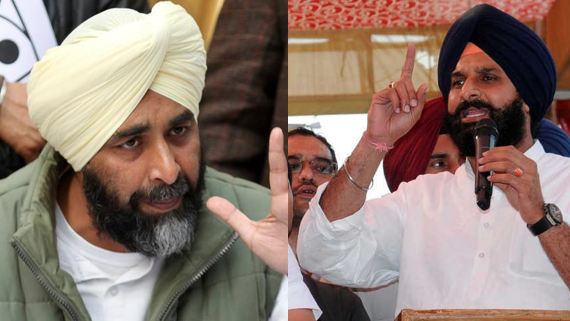 Stating that Manpreet Badal could not escape his responsibility, the Akali leader said Manpreet had authored the election manifesto of the Congress party and even announced that he had planned execution of all 428 promises made to the people. “It is shocking that now he is claiming that 128 promises which do not have any financial implication are being fulfilled. We are grateful that he had exposed himself by letting out this truth inadvertently. He should come clean on this issue immediately and tell Punjabis why he has failed to deliver on any of the major promises made by him instead of resorting to skullduggery and trying to show performance where there is none”, said Majithia.

He claimed that the Congress party continues to lie and deny farmers a genuine loan waiver due to which farm suicides were increasing by the day. “The youth has got severely demoralized as the government has failed to do anything for them leave aside implementing the ghar ghar naukari scheme”.

He said that even the schemes which were started during SAD-BJP tenure had been stopped. “This includes old age pension, aata-daal scheme, shagun scheme, medical insurance to farmers and free domestic supply of 200 units to backward castes”, he added.

He also criticised Manpreet Badal for deciding to close down Bathinda Thermal Plant.