Chandigarh: Terming he shoe hurling incident in which shoes were hurled on Sukhbir Badal’s security cavalcade as a serious attack, the Shiromani Akali Dal (Badal) has demanded CBI investigation in this regard.

SAD (B) on Friday (Oct. 5) said the attack on the cavalcade of party chief Sukhbir Singh Badal, a Z-plus protectee, was a “serious breach of security”. 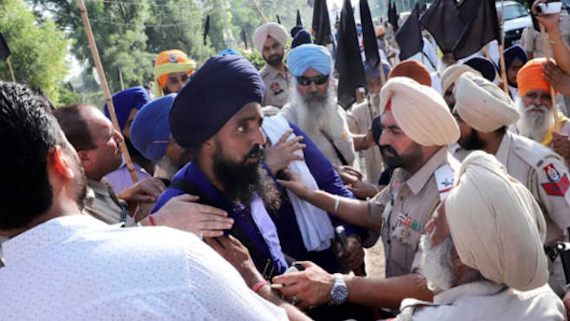 Demanding that the case be handed over to the CBI, SAD (B) leader Mahesh Inder Singh claimed that the stage-managed attack was a desperate step by the Congress ahead of the SAD’s October 7 Patiala rally.

After Sunday’s rally, a party delegation will meet the Union Home Minister to apprise him of the inability of the state to handle the security of a Z-plus protectee, he added.

Notably, some Sikh activists were protesting against Sukhbir Singh Badal during his visit in Sangrur on Thursday (October 6). Some of protesters threw shoes on passing by cars that were part of Sukhbir Badal’s cavalcade. SAD (Badal) alleges that the attack was planned and executed with the help of Punjab Police.