Chandigarh: Punjab Deputy CM Sukhbir Badal today hailed the historic decision of Canadian Prime Minister Justin Trudeau over his resolve to seek public apology over the tragic incident of Kamagata Maru in the House of Commons on May 18.

Welcoming the decision of PM Justin Trudeau on the eve of Vaisakhi during ‘Khalsa Sajna’ celebrations in Ottawa Assembly on Monday (April 12), Sukhbir Badal said in a written statement that it was indeed very heartening that the Canadian government has decided to apologise on the floor of Parliament for the Komagata Maru episode by acknowledging the hurt caused to the community in 1914. Sukhbir Badal also claimed that Shiromani Akali Dal have been pushing for years to have this formal apology made in the Canadian Parliament and the Trudeau government at last decided to seek such apology in this regard. 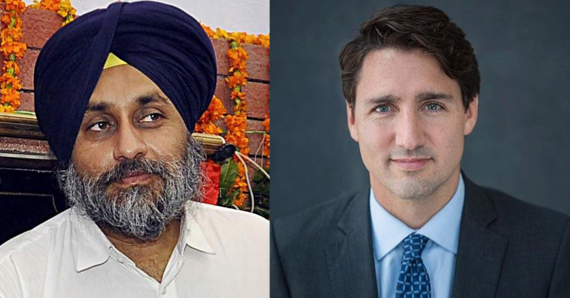 Punjab Deputy CM said that earlier the Punjab Vidhan Sabha had also passed a resolution on May 26, 2015 seeking an apology from the Canadian Parliament for this tragedy in which 19 freedom fighters were killed by British forces on the shores of Calcutta (Kolkata) in July 1914 after their ship was not allowed to anchor on the shores of Vancouver.

SAD (Badal) president also remembered Baba Gurdit Singh, one of the great Sikhs that lived ever, who had rented a Japanese ship named ‘Komagat Maru’ to rescue stranded Punjabis in Hong Kong and brought them to Canada. In chartering the Komagata Maru, Baba Gurdit Singh’s goal was to challenge the continuous journey regulation and open the door for immigration from British India to Canada during freedom struggle.

Notably a ship carrying passengers from Indian peninsula, mostly Sikhs of Punajb, was detained by the Canadian government at the Vancouver port from May 23 to July 23, 1914; then, the ship was forced to return to India. When this ship reached Budge port of Calcutta on September 29, 1914, the British government shot dead 19 freedom fighters and put many behind bars.