Saharanpur Back On Boil After Killing Of A Dalit Man, Shortly After Mayawati’s Rally

Saharanpur: As per the media reports the hard earned peace in the Saharanpur district of Uttar Pardesh  state received yet another set back when a dalit man was killed and at least 13 injured in fresh violence in Saharanpur on Tuesday evening.

This is second such inter caste clash, after a short lived lull since the clash between Dalits and Yadavs first erupted earlier this month (5th May) in which an upper caste man was killed and at least two dozen Dalit houses were torched in retaliation.

While reporting on this matter media sources stated that  the victims were targeted — in small groups across different areas — when they were returning after attending BSP chief Mayawati’s public meeting in Shabbirpur village. Some of the injured said they were attacked by Thakurs, with rods, lathis and knives. Police, however, did not confirm the identity of the attackers. Nobody has been arrested so far.

“One person was brought dead to Saharanpur district hospital while 13 were injured. Three of the 13 sustained grievous injuries and have been sent to Meerut,” said SP City (Saharanpur) Prabal Pratap Singh. Further he declined to spell out about the identity of the attackers. 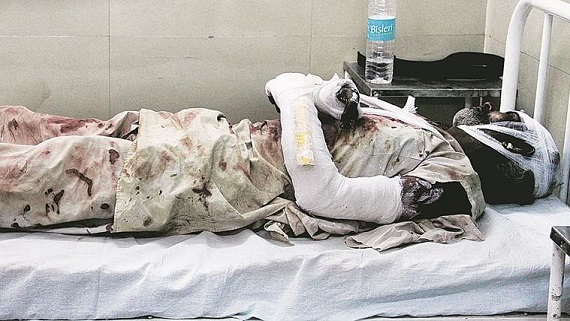 nderpal, 50, a resident of Shabbirpur village in Saharanpur, suffered injuries on his head and arms. (Express Photo)

The person who died has been identified as Ashish Meghraj, 25, a resident of Sarsawa. “He had a stab injury on the right side of his abdomen and other injuries on his body. The cause of death is yet to be ascertained,” said B S Sodhi, Chief Medical Officer, Saharanpur while interacting with Justice News.

“One person sustained a bullet injury, while two others had deep wounds which appeared to have been inflicted by knives. All have been sent to Meerut.”

The others who were injured have been admitted to the district hospital. Inderpal, 50, who was undergoing treatment in the emergency ward, said that half-an-hour after Mayawati’s meeting, he was attacked by about 10 people. “Five are Rajputs from my village. They thrashed us with rods and lathis. Both my arms are fractured, and I suffered a head injury also,” he said, adding that he was from Shabbirpur village, reports Indian Express (IE).

A 16 year old boy Shekhar in his statement to a local print said that he was on his bicycle, returning from Mayawati’s meeting, when he was attacked near Shimlana canal, about seven kilometres from Shabbirpur. The youth suffered head injuries in the attack. He too stated that the attackers were Rajputs, said media reports.

Another injured, Narendra Kumar from Halalpur, said he was on his motorcycle with two others, when they were targeted in Ambheta, about 15 kilometres from Shabbirpur. “They hit us on our heads and bodies. We don’t know why we were attacked,” he said

It all began when members of the Thakur community from Shimlana village took out a music-filled procession to commemorate the birth anniversary on 5th May 2017  of medieval Rajput king Maharana Pratap, said the media reports.

When the parade was passing through the predominantly Dalit village of Shabirpur, residents objected to the allegedly raucous celebration, triggering an exchange of heated words. The altercation ballooned into a full-blown clash with both groups throwing stones and bricks at each other.

It was during this stone pleating on each other that fatally injured a Yadav man, who later on died which resulted in the inter caste clash.