Amritsar: To carry forward the legacy of martyrs of June 1984, hundreds of Dal Khalsa youth activists carrying photographs of damaged Akal Takhat and Sant Jarnail Singh Bhindrawale today marched on the lanes and streets of the holy city of Amritsar on the eve of attack on Darbar Sahib in 1984.

Holding flags and wearing T-shirts depicting portraits of Sant Jarnail Singh Bhindrawale, the youth activists of the organization intended to convey that they were unmoved by the incidents in which hoardings and posters of Bhindrawale have been removed. One of the big hoarding with huge photo of Bhindrawale conveyed the message that “We love, admire and respect you”. The activists raised slogans in favour of complete independence. Activists were also carrying the photo of Jagjeet Singh who fell to the bullets of Jammu police yesterday. 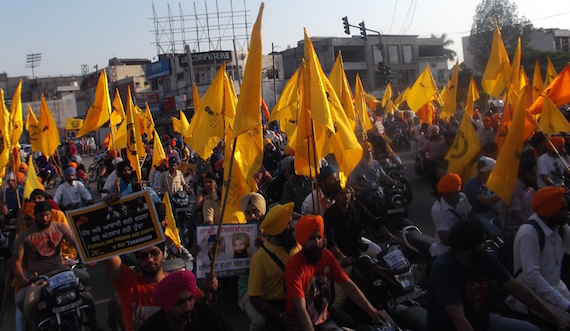 Paying glowing tributes to Sikhs, who laid down their lives in 1984 while defending the attack on their faith, the Dal Khalsa head H S Dhami today reasserted that Khalistan through peaceful means was their mission.

He said the dream of Khalistan was alive and kicking and rubbishes the systematic campaign by the (Indian) state to tarnish the image of Sikhs as “violent and mindless” people. “We are peace-loving and God-fearing people and we respect other religions and expect the same from others”, he said and added that they would adhere to international laws and norms in seeking right to self determination.

He said the Indian state has attacked our holiest shrine, ruining our pride and honour, killing and incarcerating thousands, but the irony of it all is that “India is still a great secular nation” and Sikhs have been deliberately and systematically portrayed as “terrorists”.

The spokesperson of the party, Kanwarpal Singh while addressing the media said, “Sant Bhindrawale was a part of collective Sikh psyche. Since 1984, there has been change in political situation and Sikhs have move forward, this however has not healed our wounds and scars were afresh.”

Condemning the Jammu police for killing the Sikh youth Jagjeet Singh in a firing, he said the impunity culture prevailing in the country and especially in J&K has emboldened the security forces to unleash terror on protesters and given the license to kill anyone. The Dal Khalsa declared Jagjeet Singh as a martyr who sacrificed his life for the cause.

The march that started from Dal Khalsa office was concluded at Akal Takht, where an Ardas was performed in the memory of those who were killed during the attack.

Condemning the 1984 events, president of the Sikh Youth of Punjab, Paramjit Singh said the sacrifice of the June 1984 martyrs would never be allowed to go in vain”.

Reiterating their demand for international probe into the killings of hundreds of Sikh pilgrims and loot of manuscripts from Sikh Reference library, senior leader Satnam Singh said the call for tomorrow’s bandh would be peaceful and that police should not create panic.