The protests were called by DSGMC chief Manjit Singh GK yesterday evening. GK said that the Delhi Committee had challenged the movie legally but India’s Central Board of Film Certification (CBFC) has refused to stall the movie. “As he CBFC has failed to address our concerns, we had decided to took to the streets against this movie” said GK, while maintaining that Sikh characters are shown in a disgraceful manner in the movie. 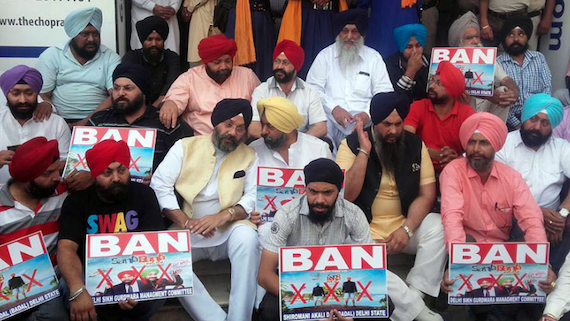 Manjit Singh GK and others protesting against Santa Banta Movie

The movie was screen at various other places across India. There were also protests against the screening of the movie at Kathua and Mumbai.

Meanwhile, many movie reviewers have termed the film as an unnecessary make. The headline of a review published by The Economic Times reads: “Santa Banta Pvt Ltd’ review: A totally avoidable film”.

“Film review: ‘Santa Banta Pvt Ltd’ was made because somebody wanted a vacation in Fiji”, reads headline of Scroll.in.