[This small piece was written way back on March 31, 1975. It was for my daughter to begin with. I was then working in South India and was exploring ways of keeping her in touch with Sikh culture and history. This is the third of such articles written with that aim in view. These articles, half a dozen in all, are not strictly historical. An emotional content was introduced to make them more meaningful to children. Though the original intention was to write them for my own children, sharing them with all children was always contemplated. It had first to be ascertained whether they would like them. So the present beginning was made by publishing one of them on the web for the purpose of gauging children’s reaction. I am given to understand that the young people liked it, which is very satisfying. I am happy to share it again with children on this martyrdom day of the Sardar.– Author].

I have decided today to tell a tale of a martyr. But how shall I go about it? Which martyr shall I choose? Shall I tell you about Bhai Taru Singh who made a cup of his skull and offered his blood in it to wash off the cowardice of centuries? Or would you like to hear of Bhai Bota Singh who along with his immortal companion Garja Singh staked claims to sovereignty in behalf of the Khalsa and levied taxes in the heart of Mughal country? Perhaps the story of Bhai Mani Singh the most venerable priest of holy Harmander will interest you better and with awe you will like to hear how he calmly sat while they cut up his body inch by inch. May be the daring deeds of Banda Bahadur ending in his incomparable martyrdom along with another eight hundred Sikhs will hold your childish attention better. Or shall I recall the tale of Baba Dip Singh about whom it is still disputed whether his wit was sharper or his double-edged sword? May be it will be more pleasant to fix the gaze on the thousands and thousands of martyrs who gave their lives to establish the sovereignty of the people by turning arrogant and cruel occupiers into warm friends of the people. Or shall we finally decide on one of those who tasted the cup of death while defending the hard won sovereign status?

You are a little girl Annu and the patience of little ones is quite often proportionate to their sizes. I will test it no longer and will come direct to the one I have finally decided upon. 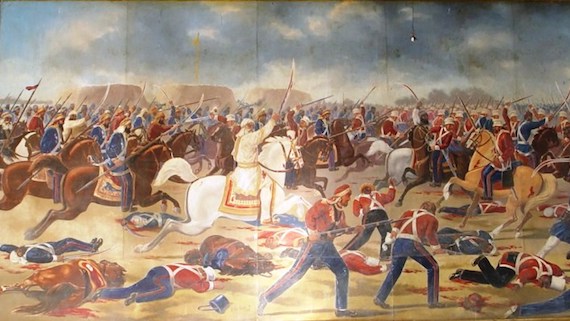 I will describe to you the last moments in the life of a white bearded saint-soldier who fell at Sobhraon on February 10, 1844. His name was Sardar Sham Singh and he was known as the Lord of Attari. From top to toe he was made of gold and his heart was of a superior stuff. The very hoofs of the horse he rode were made of diamond and the personal attendants who rode with him on his last journey shine amongst gallant men as the moon shines amongst stars.

J.D. Cunningham shall ever live through the pages of his History of the Sikhs. He says that from the very beginning of the first Sikh war the Dogras and Brahmins who held the reigns of People’s Commonwealth (Sarkar-i-Khalsa Jio) were interested in weakening the influence of the Sikh forces from politics by arranging their reverse in war with the British. Long before February 9, they seem to have come to terms with the enemy armies. So Tej Singh the Brahmin Commander-in-Chief of Sikhs came to the battle field to dissuade the ancient Sardar from risking his life. This naturally came as a shock to the Commander of the embattled army. The crafty Brahmin who had lot of poison in his heart and guile in his tongue could not understand the pure motives of Sardar Sham Singh and was bewildered.
He was keen to see that he withdraws from the battlefield without a fight. That would have immensely pleased the traitor’s masters. This is what he shamelessly recommended, recalling the vicissitudes of warfare. The suggestion stung the Sardar like a scorpion bite. He gave him a brief look of contempt, rising from his seat in the conference tent and beckoning the Commander-in-Chief, he walked resolutely towards the adjoining tent in which was enthroned the Holy Guru Granth.

He was already praying with folded hands when the treacherous son of an un-worthy mother reached the door of the court. Tej Singh wanted to cross the threshold and go in the august presence but was held back by an unseen power. The prayer of the Sardar was in customary clear and ringing tone the guards in attendance and many others strained their necks to hear every word that was uttered by him on that memorable evening. “You must be terribly disappointed with your Khalsa my Lord”, he said, “since you have placed foxes and dogs at the head of lions. I beg you to forgive the Khalsa who is Yours and is ever prepared to die for the people’s honour. Tomorrow this humble servant of yours will cast off his mud form as a sacrifice of propitiation to secure your forgiveness”. Thereafter he came to the door and called out to his syce Ram Singh, who was in attendance, “go and tell Raji that the Sardar will ride him on the field of battle tomorrow. Prepare him well. Send a word to the Sardarni at Attari that Sham Singh will not be coming home”. The moon went behind a cloud every time Tej Singh gathered courage and looked in Sham Singh’s direction. Thus did nature cooperate in denying the last glimpse of the Martyr to the eye of a serpent. Dismissing all around him the Sardar went back to prayer.

The word that the Commander had resolved to fall a martyr went around like wild fire. Spontaneously, thousands of soldiers came rushing to the tent. All night they filed past one by one looking for the last time at the serene figure. Each one of them saw the white bearded Sardar reverently pouring over the Word of the Guru. What they saw is still cherished as the noblest sight before a fierce battle.

He arose early and dressed himself in immaculate white the colour suitable to his resolution of the previous evening. He unsheathed the sword in the presence of the Guru and never put it back in the scabbard again. Eventually it had to be extricated from his hand after the martyrdom. On his turban he wrapped a shroud. It is recorded by the enemy, my daughter, that the white figure, sword in hand, was seen everywhere dealing death around him. And that like Darius of old he fought a battle which angels came to witness. His inspiring figure infused courage every where; his men fought like lions in spite of the fact that Tej Singh ran away with his followers at a critical moment and in retreat destroyed the only boat bridge across the river thus starving the army of fresh supplies.

The Sardar’s example was infectious and “yet although assailed on either side by squadrons of horse and battalions on foot, no Sikh offered to submit and no disciple of Gobind asked for quarter. They every where showed a front to the victors, and stalked slowly and sullenly away, while many rushed singly forth to meet assured death by contending with a multitude. The victors looked with stolid wonderment upon the indomitable courage of the vanquished” …(Cunningham).

His body was riddled with bullets and the number of holes could not be counted when it was finally extricated from a heap of uniformed bodies. Around the spot the enemy lay the thickest. Six of the searching soldiers swam across the river with the body of their leader. The pyre was ready on the outskirts of the village and knowing the resolution of their Lord the men and women of Attari awaited mourning around it. Mourning also the Sardarni, because as soon as she was given the message, she ordered two pyres to be built. Taking the clothes her husband had donned on their wedding day, she had ascended the pyre and had calmly lit it herself. It was not the conventional widow-burning syndrome that had overpowered her. She simply had no use for the world that her Sardar had so resolutely decided to quit. Her ashes lay smouldering when Sham Singh arrived. They put him on the second pyre and his eldest son assisted by the Sardar’s personal attendants and comrades in arms, lit it.

You must walk a thousand miles, if you have to, to go and see the Samadhi of Sardar Sham Singh and the Sardarni. You must be familiar with the last resting place of the worthiest son of the Punjab. If you reach when the life is ebbing out of the sun and its crimson blood is spreading across the dull sky, you will unfailingly notice an old figure trudging its way towards his last resting-place. When I had gone, an old woman bent double on her rough staff had come. She had laid it besides the construction and had slowly arisen holding on to the brickwork. She laid the little earthen lamp on the Samadhi and lit it. With one great effort she straightened herself up and gazed a short while at the sky. In the small light, I think I could discern the two small tears in her eyes and disappointment in her countenance before she had turned back to go.

In Attari there is a belief that a star as brilliant as the pole star will be seen in the sky when another Sham Singh will have been born.

The ancient spirit of the old martyr surveys the land of our ancestors, my daughter, and is downcast but hopefully turns its gaze to the pure daughters of the Punjab. “When will another Sham Singh be born?” it asks.