Sasikala Natrajan To Be Next Tamil Nadu CM, O Panneerselvam Steps Down

Chennai: Sasikala Natarajan who had been a long time compainion and close aide of the late Tamil Nadu CM J. Jayalalithaa has been elected the chief of AIADMK’s legislature party, clearing the decks for her takeover as the Chief Minister of Tamil Nadu, currently she is serving as the party chief.

The current Chief minister O Panneerselvam,had proposed her name at the party’s internal meeting this afternoon, announced his resignation. Ms Natarajan’s elevation ends a period of intense speculation and fulfills the vociferous demands of a section of the party who contended that it was unwise to for the party and government to have different power centres in the state.

In her lifetime, Ms Jayalalithaa occupied both posts and after taking charge of the party, Ms Natarjan had promised to follow in her footsteps. 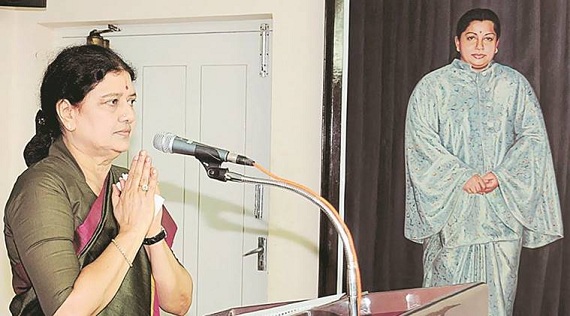 As reported by the media sources after the announcement was made Ms Natarjan appeared in front of supporters on the balcony where the former Chief Minister often seen, hands folded, in a dark green sari — a colour greatly favoured by Jayalalithaa.

Mr Panneerselvam, 65, who had stood in for Jayalalithaa twice earlier when she was arrested on charges of corruption, was made the Chief Minister after her death in December last year.

Ms Natarajan, 61, is not an elected member of the assembly and had never held any post either in the party or in the government. It was after a lot of coaxing from the partymen that she had taken charge of the party. After her acceptance of the top party post, there has been calls for Mr Panneerselvam to step down.

It was expected that Ms Natarajan would take over as chief minister by the end of January, but the massive protests across the state over demanding the removal of a ban on Jallikattu — the bull taming sport organised during the harvest festival of Pongal – said the media while referring to its sources.