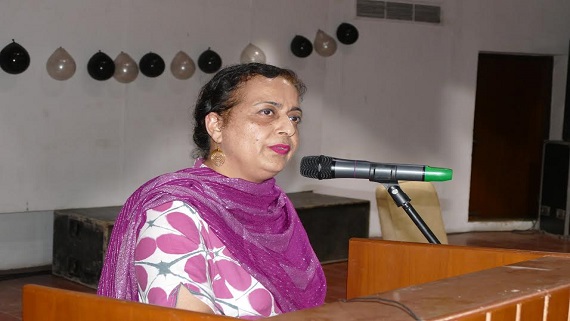 Dr. Harshinder Kaur delivering her lecture during a discussion.

Dr. Harshinder Kaur is a Punjabi writer, pediatrician and an activist, who is known for giving voice to the plight of women in our society with focus on Punjab. The members of the forum said that “woman is not only a part of the human society but it is the first half of the society and an ecstatic society cannot be built without equal association of women.”

“The way women’s freedom is being talked about on the patterns of the West, it is in the same way as the Western political models could only create the illusion of freedom, but in the realm of practicality, freedom remained confined to only a handful of people.”

Therefore, a new definition of women’s freedom is needed, and the woman will only be able to remain independent in the right sense when she herself will create this definition and will lift the flag to make it a reality, they added.

Referring to the uniqueness of today’s program, it was stated that its overall management has been done by the girl students at the forefront, while, commonly, it is seen that the boys play a leading role in every program and girls only help them at secondary level.

They said that the students have the tendency and thought of giving new guidance to the society and it can be expected from the students of Panjab University that they, in the light of the principle of ‘Dhur Ki Bani’ preached by the Sikh Gurus, define the freedom of women and make efforts to establish respect for them.