As per release Satti demanded to abolish entertainment tax being levied on holding of cultural events and plays in the state so that Punjabi artists could earn their livelihood respectfully without depending much upon the program organisers. 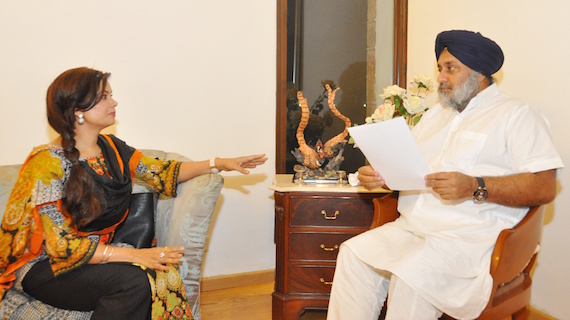 During a special meeting here with Deputy chief minister to promote Punjabi language, culture, art in the state she pleaded to encourage the Punjabi entertainers in this regard. Lauding the initiatives of Punjab government to promote Punjabi culture and heritage, Satti said the Punjabi artists should also be inspired with wholeheartedly as in the present IT era the cassettes and CD recorded by performers and artists were facing sales shortage. She demanded form the State to abolish entertainment tax being collected in lieu of holding of cultural events and plays, reads the release.

Expressing gratification on the rejuvenation of Punjabi cinema during the SAD-BJP regime, Satinder Satti said several Punjabi movies had become hit on the screens as compared to big budget Hindi films in the Bollywood. With a view to give further boost to local movies, she appealed to the Deputy CM to issue directions to the owners of all cinemas by binding them to screen atleast one show of Punjabi film daily on the pattern of Maharashtra government directives to promote regional films and language in the state. She stressed it will certainly promote production of more Punjabi movies and encourage the producers, artists and young generation related to the film industry, the release reads further.

Seeking adequate security protection to entertainers and performers, Satti also demanded to adjust Punjabi artists in the boards and corporations along with political persons besides ensuring life insurance and pensions during their golden age.

Deputy chief minister gave a patience listening to Satinder Satti and assured her to resolve the issues at the earliest and informed that he would have a meeting with Chief Minister including concerned officers after the budget session was over.