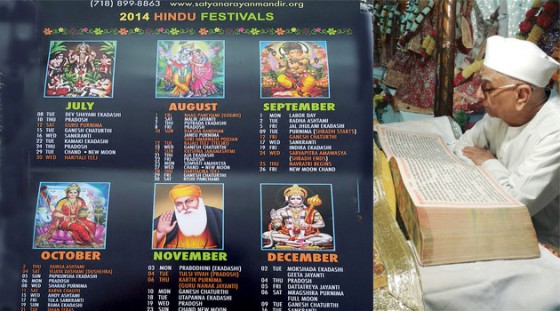 Not only this, the Satya Narayan Mandir, where various ‘karam kaand’ are undertaken, also places a saroop of Sri Guru Granth Shaib Ji (the Sikh Scripture) where clean shaven Hindu Pandits with ‘gandhi/nehru topi’ perform ‘sewa’ and ‘paath’ of Guru Granth Sahib.

A calendar published by this temple lists Guru Nanak Ji’s Parkash Gurpurb as a ‘Hindu festival’.

It is notable that Sikh religion condemns ‘idol worshiping’. An edict Akal Takht Sahib prohibits parkash of Guru Granth Sahib in Hindu temples or other places where idols are worshiped or any other activity prohibited by Sikh principles is undertaken.

Hindutva forces are heading with their evil plans to distort the unique principles of Sikh religion and assimilate Sikhs into ‘Hindutva’ fold.