Ludhiana: The Supreme Court of India has restored state governments’ constitutional powers to grant remissions and permanent release to life terms convicts but it has not lifted the stay on such powers where the sentenced was granted under TADA or the case was investigated by the CBI. 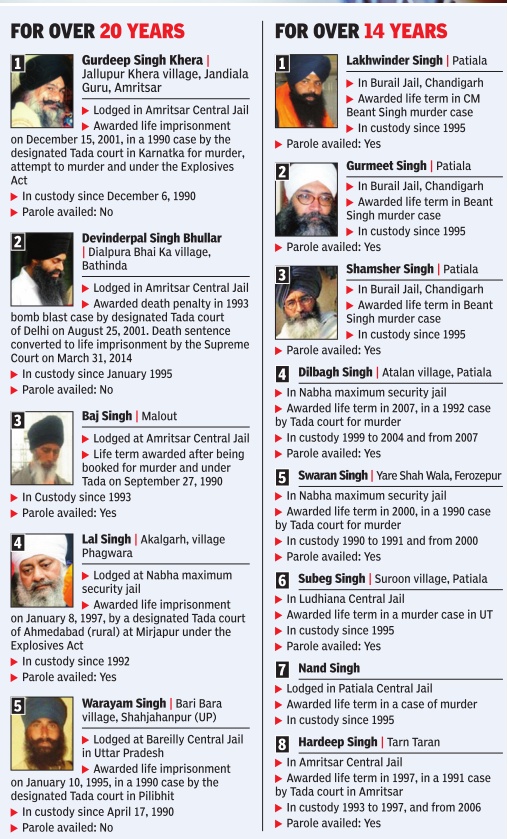 Five of these Sikh political prisoners have undergone imprisonment for more than 20 years.

“But there is no stay on releasing these prisoners on parole or pardoning or suspending the sentences”, said Advocate Jaspal Singh Manjhpur who had prepared the list of Sikh political prisoners lodged in jails across the country . The list has now been revised to 65 from 82.

“The state government is not even ready to grant them parole to many of the Sikh political prisoners lodged in state’s jails,” Manjhpur said.

“There are many ways to grant release, permanent or interim, to concerned Sikh political prisoners. There are enough powers with the state governments but is seems that Badal government was unable collect the requisite political will to use such powers”, said Manjhpur.

SC rider does not apply to 8 Elderly Sikh political prisoners:

Eight other elderly Sikh prisoners aged 62 to 85 years, whose names figure in the list of 65 prepared by Manjhpur, were convicted in the Ludhiana bank robbery case, but they were sentenced to imprisonment for 10 years even though they were convicted under Tada.

“The SC order does not impact their cases as the stay is only on remission to life term convicts only, he contended.