Amritsar: The pro-freedom Sikh organisation Dal Khalsa today called upon the Sikhs to have faith in the future and made a solemn commitment on the eve of Ghallughara 1984 that the struggle for the fulfillment of ambitions and aspirations of the community would be taken to the logical conclusion following the democratic path.

Paying rich tributes to Sikh martyrs of June 1984 and vowing to carry forward their mission to its logical conclusion, he Dal Khalsa took out a “Genocide Remembrance Parade” on the streets of the holy city, on the eve of 34th anniversary of army attack codenamed a blue star.

Hundreds of party activists marched on the roads of the city displaying photographs of damaged Akal Takht and Sikh martyrs who died during the attack while fighting against the Army. 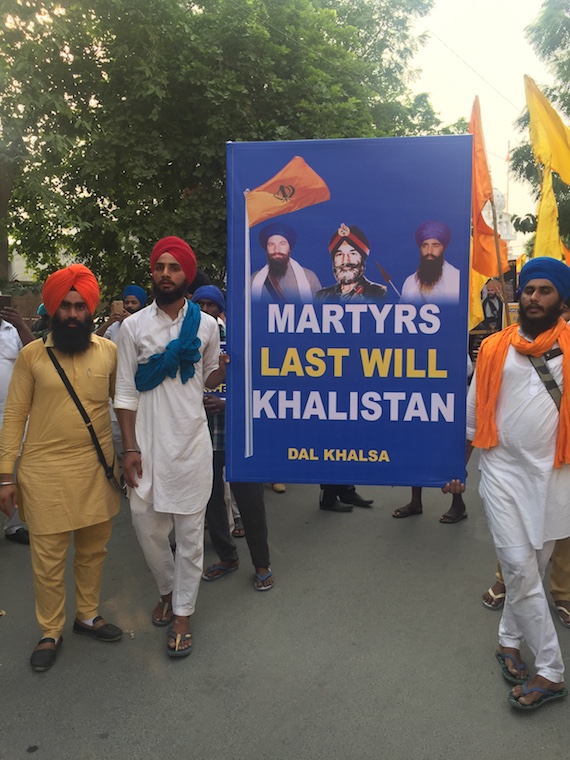 A view of Ghallughara Remembrance March held in Amritsar on 5 June, 2018

Carrying saffron flags and placards on which it was depicted that wounds of the attack still simmered, pain was fresh and struggle continued, they marched raising slogans, seeking Punjab’s independence. They also raised slogans in favour of Khalistan.

In a resolution the organization reasserted that the struggling people all over the world have to experience different phases and the Sikh struggle is no exception. The storming of the Darbar Sahib by the Indian army in June, 1984 supported by tanks and artillery guns was a watershed development that left permanent scars on the collective Sikh psyche. The community avenged Indian army’s attack on Darbar Sahib in the true Sikh historical tradition. The basic issue is fulfilment of the political objective for which that struggle was launched. 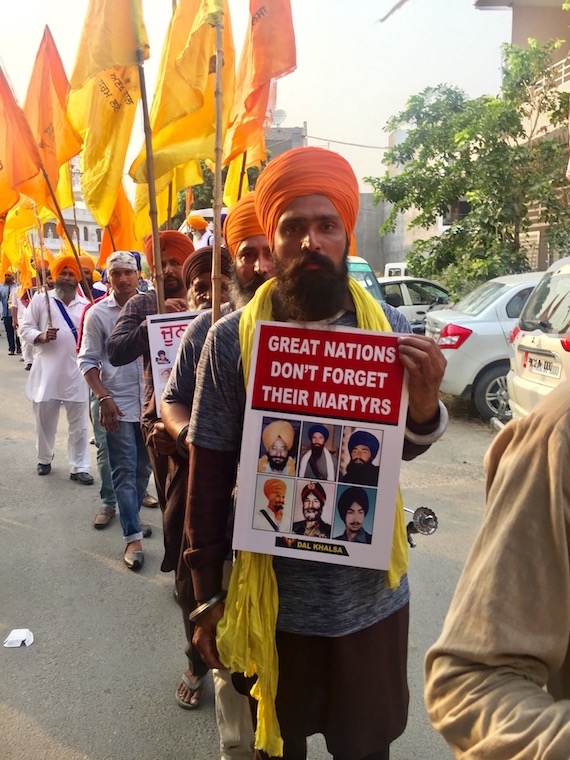 Maintaining that the struggle was continuing the resolution cautioned the Sikhs against opportunistic elements dominating the political stream that have been exploiting the sacrifices for the cause.

Addressing the protest to commemorate 34 years of the army attack, outfit head Harpal Singh Cheema said: “Thirty-four years ago, with the attack on the Darbar Sahib, the foundation stone for an independent state was laid. The sentiments of sovereignty that were strengthened by the army attack have not been buried with the passage of time and change in the political scenario.” He said keeping the hope alive would be the best tribute to those who sacrificed their lives during Ghallughara June 1984.

He said “There is no need to identify such parties as the situation speaks for itself. The latest case is that misguiding the Sikhs on the issue of waiver of GST on Langar items by the SAD (Badal). This traditional leadership has gone even to the extent of damaging the very doctrine of Langar that is a symbol of egalitarian social order and not just free kitchen to which it has been belittled by these people”, he added.

Summing up the heinous attack on Sikh faith, party spokesperson Kanwar Pal Singh said, the BJP asked for it, the Congress than in government carried out and the whole of India reveled on it. Youths were carrying placards in this context. 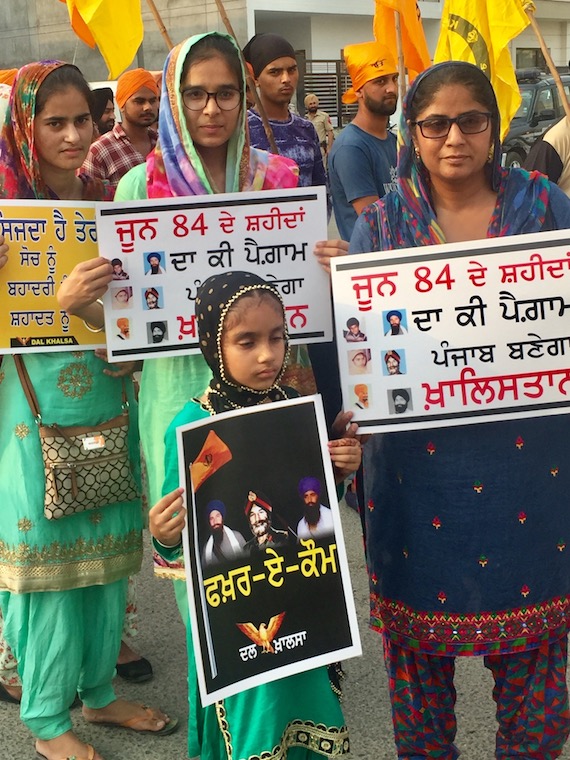 A big float was rolled on the road to draw the attention of passer-by on which photographs of Sikh martyrs along with Khalistani thoughts were depicted.

Excerpts from the speeches of Sant Jarnail Singh Bhindrawale along with inspiring songs were played on a DJ system to which youth responded with spirited sloganeering.

Reiterating their call for Amritsar Bandh on June 6 to protest against the Army assault on Darbar Sahib some 34 years ago, the Dal Khalsa called upon the people of the city to feel the pain of the deadly attack and support the shutdown call.

Addressing the march, party former head H S Dhami demanded from the UNO to prosecute the perpetrators of the June 1984 deadly attack as thousands of innocent pilgrims, SGPC employees, political activists and volunteers were slaughtered by the forces during the attack.