New York, NY, USA (July 24, 2015 – Press Release): Ahead of the US visit of Capt Amarinder Singh, a Sikh rights group sought criminal prosecution of former Chief Minister of the State of Punjab for reinstating, promoting and protecting the police officials named repeatedly by victims and human rights groups as perpetrators of torture, disappearances, and extrajudicial executions during counter insurgency operations in 1990’s.

“Sikhs For Justice” (SFJ), a human rights group lodged a criminal complaint against Congress Member of Parliament Capt Amarinder Singh with the US Attorney General Under Section 509B of the Human Rights Enforcement Act of 2009 for aiding, abetting and shielding the crimes of torture, extra judicial killings and genocide of the Sikh population. 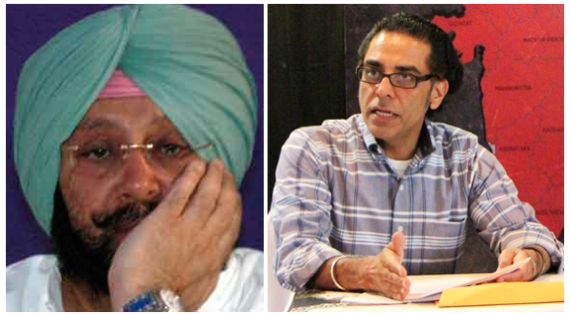 Section 509B (b) (1) of the Human Rights Enforcement Act of 2009 (Public Law 111-122) provides that the US Attorney General is authorized to take appropriate legal action against individuals suspected of participating in serious human rights offenses; and coordinate any such legal action with the United States Attorney for the relevant jurisdiction.

Citing Human Rights Watch 2003 report, SFJ’s July 24 complaint to Loretta Lynch, the US Attorney General stated “Police counter-insurgency efforts included torture, forced disappearances, and a bounty system of cash rewards for the summary execution of suspected Sikh militants. (HRW 10 Jun 2003). Human Rights Watch described the government’s counter-insurgency efforts as “the most extreme example of a policy in which the end appeared to justify any and all means, including torture and murder.”

“The decade-long police crackdown of [sic] the insurgency led to the deaths of at least 40,000 people in Punjab” (Committee for Coordination on Disappearances in Punjab (CCDP) Jun 2003), “including 10,000 civilians” (Amnesty International Report, 20 Jan 2003), SFJ Cited reports to strengthen the case against Capt Amarinder Singh.

Virk officially admitted to the “operational secret” of using militants to counter other militants and revealed that there were nearly 300 “black cats”, who helped the cops during ‘’war against terrorism”. Capt. Amarinder Singh appointed S.S.Virk as head of Police force in Punjab despite Virk’s notorious past and role in torture and extrajudicial executions while serving in CRPF during the counter-insurgency era.

“Visit to the US has become a routine for political leaders from Punjab who are guilty of gross human rights violations and responsible for protecting and shielding police officials engaged in torture and extra judicial killings of the Sikh population during 1990’s”, stated attorney Gurpatwant Singh Pannun, legal advisor to SFJ.

“We have filed civil law suits in the past to hold these leaders accountable for their crimes, but now we will seek criminal prosecution of these powerful politicians as they continue to enjoy immunity with impunity in India”, added attorney Pannun.