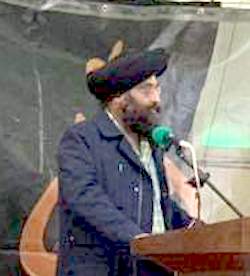 Against the backdrop of the continuing crisis in South Asia, triggered by India’s purported annexation and lockdown of Indian-held Kashmir, the World Sikh Parliament has called for urgent international intervention to prevent a catastrophic war that most military experts expect to be a nuclear conflict with casualties measured in the tens of millions. It would inevitably lead to the annihilation of Kashmir, along with the neighbouring Sikh homeland of Punjab. And the Sikhs, as a nation, are not even a party to the Kashmir dispute.

Indian PM Modi has openly threatened Pakistan with nuclear weapons, incredibly boasting that the weapons are not just kept for entertainment at Diwali. Pakistan has declared it will use its nuclear arsenal, rather than face possible defeat in the face of conventional war. Clive Stafford Smith and Eric Lewis, writing this week in the Independent, explore the inhuman aggression of Modi’s crackdown on the hapless Kashmiris and how this will inevitably lead to confrontation with Pakistan. They explain that this crisis is like no other conflict across the spectrum of intractable international disputes: “US officials conduct ‘war games’ every few years to test the risks of nuclear war. Every hot situation ends up with a pragmatic solution except one: India and Pakistan”. Their article refers to retired US General Sam Gardiner who has long been vocal on the issue; he has identified that military conflict will arise over the Kashmir dispute but that the plains of Punjab will be the key theatre of the war.

Academics at the University of Colorado have this month issued a bleak assessment of an Indo-Pak nuclear war after reporting that, against the international trend, the is a nuclear arms race in South Asia. Their report, entitled ‘Rapidly expanding nuclear arsenals in Pakistan and India portend regional and global catastrophe’, concludes that an Indo-Pak nuclear war will lead to 50 to 125 million deaths in the region, with the fallout going on to kill millions elsewhere.

It is foolish to assume, against all the evidence, that this crisis is going to go away simply by meekly accepting New Delhi’s line that this is an “internal matter”, despite the UN Security Council’s previous intervention over this disputed territory. It is time for serious politicians across the world to engage with all the stakeholders in the region to diffuse the crisis and broker a settlement of all pending disputes. Crucially, such conflict resolution, must respect international law and – specifically – the right to self determination in the regions being directly threatened.

At its recent two-day session in Derby, UK the World Sikh Parliament reaffirmed its resolve to deliver independence for the Sikh nation in Indian-controlled Punjab, pursuant to its right of self-determination and to support the Kashmiri neighbours in their equivalent struggle. Having experienced genocide at the hands of Indian state and non-state actors since the early 1980s, the Sikhs know only too well that the Kashmir scenario will get much worse than the current ‘lockdown’. It also resolved to take up the deadly threat to all in South Asia by engaging with the UN and other key players. The twin policy approach is projected as the only way to get two nuclear armed rivals to physically disengage over the Kashmir and Punjab border regions which continue, as former US President once put it, to be the most dangerous place in the world.

Members of the World Sikh Parliament have this week put their proposals directly to Kashmiri leaders and received their wholehearted support. The ‘self-determination roadmap’ accords with the Sikh nation’s goal of self-rule in its homeland, but also offers the wider region a peaceful and equitable solution which is clearly absent from the dangerous rhetoric coming out of Hindutva’s right-wing mouthpieces in New Delhi. At a time when Sikhs are marking Sri Guru Nanak Dev ji’s 550th birth anniversary, the nation born out of his revolutionary movement will take the lead in proposing a just peace for the region where he was born and spent most of his life. The Hindutva project of making Punjab and Kashmir part of a Hindu state is an illegal and unworkable venture. The break-up of artificial states held together by force, such as the former USSR, is not only inevitable but an essential process in securing enduring peace. Set against that example, we have a more enlightened approach in the UK where, recognising that it is a multi-national state, it has demonstrated its democratic credentials by delivering an independence referendum in Scotland.

According to the World Sikh Parliament, it is time leaders in Pakistan, India and other states endorse the only credible formula for peace in a region that has been devastated by war, genocide and injustice for far too long.