London, UK: Jagdeesh Singh a public campaigner on national self-determination through “Nations Without States” and the National Liberal Party (UK), has urged the people of Scotland to move to 18th September 2014 with a Brave-Heart.

He has urged the people of Scotland to take this crucial opportunity to make Scotland a fuller and stronger country and nation, by voting YES!

He has described the stark and sensationalized allegations of financial ruin and collapse being made by Cameron, London and the NO campaign as entirely grotesque and amounting to emotional blackmail.

“These are grotesque, opportunistic lies, designed to confuse, distract and scare the people of Scotland. The Scots needs to be brave and confident, and move over these lies with optimism!” He adds: “Confidence and courage changes everything, including economies. Scotland already has a wonderful economy, with wonderful global prospects ahead. The London ruling elite is trying to obscure and blur this with its campaign of systematic lies and confusion. They are starkly saying that Scotland is incapable of being on its own. Scotland’s free, highly attractive, internationally renowned education system, in stark contrast to the rest of the UK, is a direct rebuttal of this systematic rubbish”. 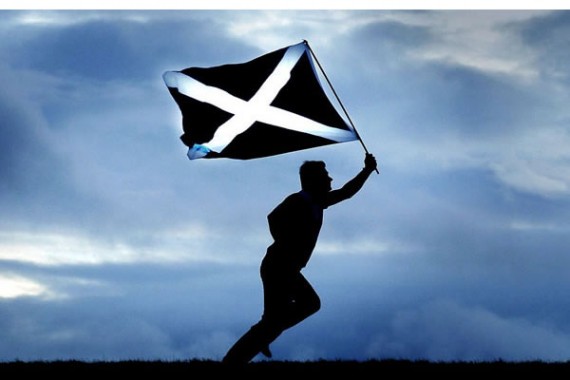 “Scotland deserves much, much better than simply being an extension of London. Scotland has a rich civilization, history, culture, national heritage, a rich and vibrant sense of life. It deserves to have its place as an equal nation in the world as whole”.

“The bitter and desperate language of financial and emotional blackmail by the London elite, is evidence of a horrible racism and intolerance to Scotland being a full-fledged nation and country. It is a direct declaration that Scotland, its people, its economy, etc are Incapable and too Incompotent of being able to function successfully without the overarching control and governance of London. This is the modern day, veiled language of domination and imperialism”.

Jagdeesh Singh further says: “Give Scotland a chance, and it will show the United Kingdom how successfully and vibrantly a small, beautiful, energetic country can not only survive but progress in leaps and bounds, beyond the shackles of a bigger over-arching power structure. Small is powerful! Small is beautiful! ” He says Scotland has the will, intelligence, resources and vision to be an economic success. “Scotland is ready to work with the UK as an equal, not as a subordinate! An independent Scotland will make for a more democratic and healthier United Kingdom, with power similarly being granted to the Welsh and English.”

“The cause of Scotland is identical to the cause of so many small, authentic nations across the globe, clamoring for true, substantive freedom out of the global monopoly of big, rigid states. These stateless, disrecognised peoples have a natural right to decide their own life and development. Scotland, Catalonia, Wales, Matabele, Biafra, Punjab, Basque, Kashmir, Kurdistan, Sabah-Swarak, South Azerbaijan, Tamil Nadu, Nagaland, Tamil Ealam, Balochistan and more are very capable and competent enough of running their own affairs”.

“Many of these stateless nations have long histories, like the Scots, of previous independent statehood where they have proven themselves to be major commercial, military and political powers in regional and international affairs. Why do we want to hold these able and confident nations back from the same? The embittered opposition is evidence of intolerance, inequality and insecurity of these over-arching states, who want it all their own way”.