Patiala: A seminar dedicated to the memory of those killed during Sikh genocide of November 1984 was organised by students of Punjabi University, Patiala. The topic of the seminar was “on the “Sikh Genocide 1984”. 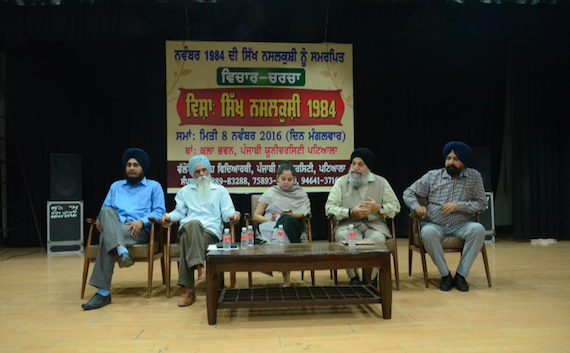 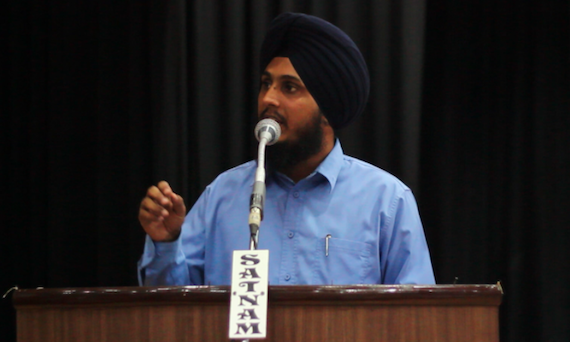 During this seminar Parmjeet Singh presented his paper on topic “Genocide and the Sikh Genocide 1984”. He threw light on the term “genocide” as coined by a Jewish lawyer Raphael Lemkin to define the practise of genocide. Parmjeet Singh explained as to how the term genocide conceived its meaning, was generalised and was recognized as a ‘crime of all crimes’ under the international law.

He quoted genocide scholar Gregory H. Stanton’s research about the “Eight Stages of Genocide” to lay stress on the fact that the November 1984 massacres of Sikhs in India were in fact a ‘genocide’. Along with the two Ghalugharas (Holocausts) suffered by the Sikhs in the 18th century, the Sikh Genocide of November 1984 has attained place as the third major Ghallughara of the Sikh history. He said that this heinous crime was committed in the so-called largest democracy on earth by active participation of the state apparatus.

He further laid stress to remember such cultural traumas and make that a part of collective psyche of the entire Sikh nation. 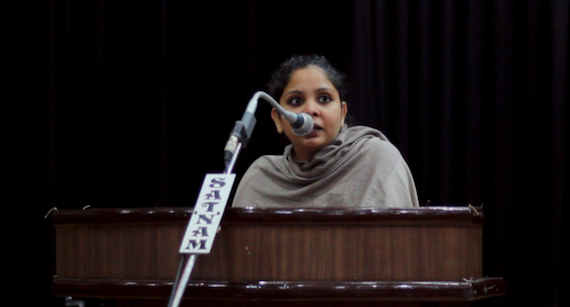 Calling herself as a daughter of 1993 Anti Muslim violence, investigative journalist Rana Ayub said she has personally experienced the pain and horror of the violence and  that a Sikh family had sheltered her along with her sister during that fateful period.

Addressing a jam-packed hall Rana Ayyub further stressed that rise of Narinder Modi and Amit Shah, directly responsible for genocidal massacre of 2002, at the helms of political power in this country reflects the dead consciousness of our society.

She said that listening to lectures on Sikh Genocide 1984 or the Gujarat 2002 could not be of any avail unless we look into our own consciousness to find the truth and stand up for it.

She also spoke about her book Gujarat Files and informed that the Punjabi version of this book has already been published and it will be launched soon. 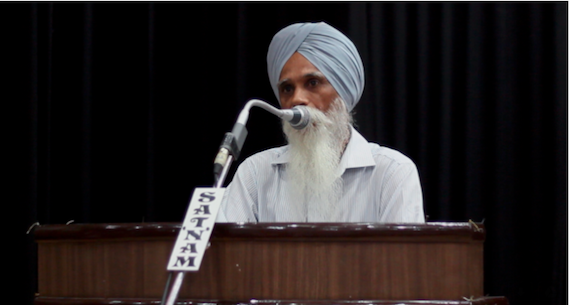 Bhai Ajmer Singh sharing his views during the seminar

Sikh Historian Bhai Ajmer Singh shared his views on topic “Lessons learnt from November 1984”. He said that the denial of genocide goes hand in glove with the genocide massacres as every attempt is made to hide the true identity of the culprit section. Vague  and very generalised terms – such as goons, anti-social elements, killer mobs are invoked to conceal the real identity of the perpetrators and Sikh Genocide of November 1984 is a classical example of this above fact.

He further stated that genocidal episodes have their roots in genocidal impulse that prevails in any society and takes aggressive form in certain conditions. He said that in order to understand any genocidal atrocity, it is important to identify the prevailing  genocidal impulse.

History stands witness to the fact that the  Hindu society does posses such a genocidal impulse which turns active when they capture political power. He invoked many references to establish that the November 1984 Sikh Genocide was direct outcome of genocidal impulse which had gripped the Hindu psyche at that time. It is important for the Sikhs and other minorities  inhabiting this peninsula to understand this  to ensure their existence. 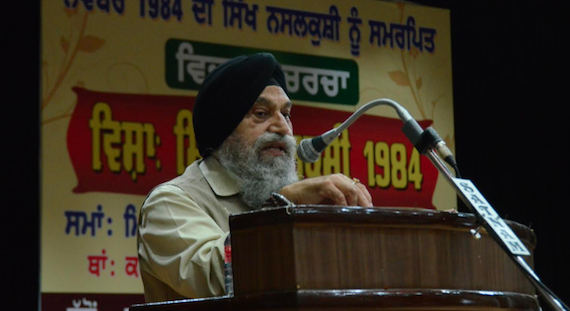 Dr. Jaspal Singh sharing his personal experiences during the seminar

Punjabi University vice-chancellor Dr. Jaspal Singh shared his personal experience of November 1984 massacre of Sikhs in Delhi. He said that his own house was reduced to ashes and he had to jump into a burning house to save his wife and six months old daughter and was surprised to find many familiar faces in the mob that had attacked his house. He lamented that he used to think that he had friendly relations with them but they had come to burn my house and kill me.

He said that the Punjabi University was making efforts to document the traumatic experiance of that fateful period of November 1984 and the Oral History Department of the Panjabi University would conduct interviews of the survivors of that pogrom and record their experiences.

Dr. Gurmeet Singh Sidhu, head of Religious Studies Department extended note of thanks at the end of the seminar. The proceedings of the stage were conducted by University research fellow Makhan Singh.

Note: Video recording of this seminar will be made available online by the Sikh Siyasat News soon.