Fremont, CA: On Sunday, April 17th, the Organization for Minorities of India will be hosting a seminar on the current surge of violence against India’s minorities. Our speakers Dr. Manisha Bangar (BAMCEF/Mulnivasi Sangh) and Jaskaran Kaur (Ensaaf) will explain the root cause of the recent agitations among minority students at Indian Universities following the death of Dalit student Rohith Vermula.

“His death serves as a heartbreaking reminder of the diaspora’s duty to the most vulnerable in India,” said Bhajan Singh, founding director of the Organization for Minorities of India. The event will also feature a human rights workshop on how you can support the cause of the oppressed Mulnivasi people throughout India.

Dr. Manisha Bangar (Hyderabad, India) is a renowned gastroenterologist and national activist who works for the liberation of those constitutionally designated as Scheduled Castes (SC), Scheduled Tribes (ST) and Other Backward Classes (OBC). Her organizations BAMCEF and Mulnivasi Sangh are dedicated to creating a casteless society by annihilating class exploitation. 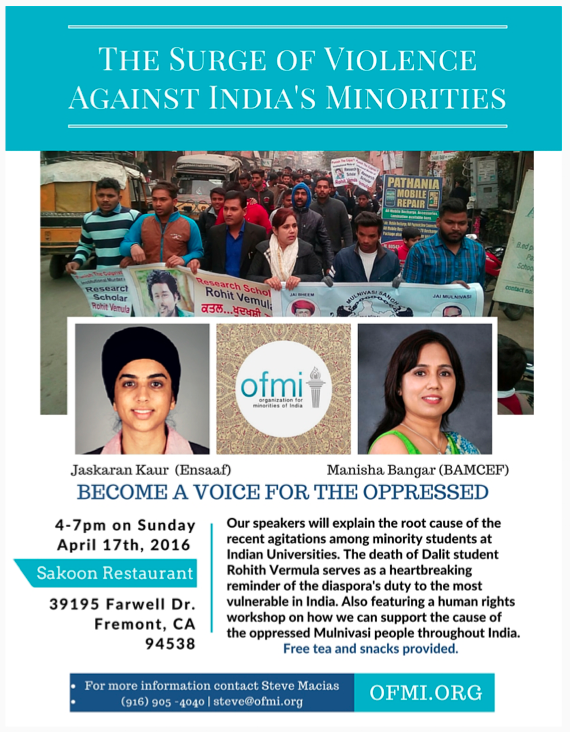 Jaskaran Kaur (Pleasanton, Ca) is the co-founder and co-director of Ensaaf, a nonprofit organization working to end impunity and achieve justice for mass state crimes in India, with a focus on Punjab, by documenting abuses, bringing perpetrators to justice, and organizing survivors. She graduated with distinction from Yale College and Harvard Law School.