On December 17, Kumar was sentenced to life in prison. The verdict, passed by the High Court of Delhi, found him guilty of criminal conspiracy and abetment in the commission of the crimes of murder, promoting enmity between different groups on grounds of religion, and doing acts prejudicial to maintenance of communal harmony. It specifically cited his involvement in the burning of a Sikh Gurdwara (place of worship). 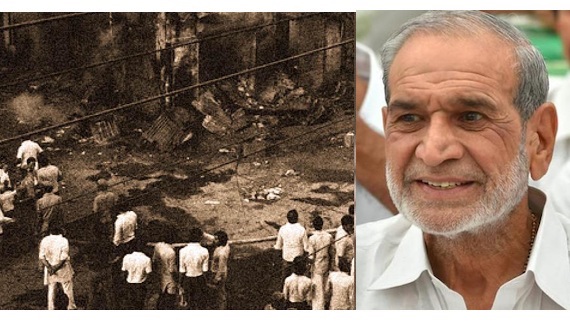 Eyewitnesses implicated at least six MPs as leaders of organized, armed mobs which slaughtered thousands of Sikhs in Delhi between October 31 and November 1, 1984. Several city officials, senior police officers, and leaders from the Indian National Congress (INC) party were also named. The violence was sponsored by the Congress party in retaliation for the Oct. 31 assassination of Prime Minister Indira Gandhi by two of her bodyguards, who were Sikhs. They shot her in retaliation for the Indian Army’s June 1984 invasion of the holiest Sikh shrine, Harmandir Sahib, in which several thousand Sikhs died.

“The conviction of Sajjan Kumar is an absolute sham and should serve as a wake up call to India’s minorities who, together, make up the majority of the population,” says Bhajan Singh, Founding Director of Organization for Minorities of India (OFMI). “Tens of thousands of Sikhs were massacred by mobs led by Congress thugs and RSS paramilitaries. Now 34 years later only one man is sentenced and he is not even in jail but still walks free. For the oppressed Mulnivasis, we will label this as Hindutva dust thrown into our eyes to blind us to reality. It is a pattern. First the Hindutva outfits kill you, then they delay the wheels of justice for a generation, then they give a token sentencing as in the case of Sajjan. This example should put on alert everyone else seeking justice under India’s Hindutva-tinged constitution.”

Maken was assassinated in 1985. Bhagat died in 2005. Shastri and Tytler are both retired. Nath, however, remains active in politics. Until December 2018, he remained a Member of Parliament. He left on December 17 — the same day that Kumar was convicted — to assume office as Chief Minister of the state of Madhya Pradesh.

Elected officials are also implicated in most of the other major massacres of minorities in India which occurred after 1984. Some of these include:

– In 2002, at least three Members of the Legislative Assembly (MLAs) in Gujarat — Chief Minister Narendra Modi, Maya Kodnani, and Haresh Bhatt — allegedly incited mobs to kill up to 2,500 Muslims in retaliation for the deaths of 59 Hindus in a train fire.

– In 2013, at least one MLA — Sangeet Singh Som — allegedly incited a mob to kill at least 42 Muslims in Uttar Pradesh.

Identifying “a familiar pattern of mass killings” which began with the 1984 violence, the court’s verdict on Kumar admits that the involvement of politicians in anti-minority massacres is a long-term problem. According to the verdict:

“In India, the riots in early November 1984 in which in Delhi alone 2,733 Sikhs and nearly 3,350 all over the country were brutally murdered (those are official figures) was neither the first instance of a mass crime nor, tragically, the last. The mass killings in Punjab, Delhi, and elsewhere during the country’s partition remains a collective painful memory as is the killing of innocent Sikhs in November 1984. There has been a familiar pattern of mass killings in Mumbai in 1993, in Gujarat in 2002, in Kandhamal, Odisha in 2008, in Muzaffarnagar in U.P. in 2013, to name a few. Common to these mass crimes were the targeting of minorities and the attacks spearheaded by the dominant political actors being facilitated by the law enforcement agencies. The criminals responsible for the mass crimes have enjoyed political patronage and managed to evade prosecution and punishment. Bringing such criminals to justice poses a serious challenge to our legal system. As these appeals themselves demonstrate, decades pass by before they can be made answerable. This calls for strengthening the legal system. Neither ‘crimes against humanity’ nor ‘genocide’ is part of our domestic laws of crime. This loophole needs to be addressed urgently.”

Out of 16 politicians accused in six incidents, only two have been convicted. In 2012, Maya Kodnani was convicted for her role in the 2002 Gujarat Genocide. She was sentenced to 28 years in prison. In 2014, however, her sentence was suspended due to poor health and, in April 2018, she was acquitted by the Gujarat High Court. The only other person convicted is Sajjan Kumar.

“State sponsorship of pogroms in India is a systemic issue spanning decades and crossing party lines,” comments Pieter Friedrich, an analyst of South Asian affairs. “Participation of politicians in pogroms is not an aberration, but almost a routine occurrence. In most cases, increased political success is actually the outcome. Modi is, of course, the premier example of that. It’s nearly impossible to even indict someone, let alone initiate a prosecution. Jagdish Tytler, for instance, was caught on camera bragging about killing 100 Sikhs. Several participants in the 2002 Gujarat carnage were also caught on camera talking about how Modi helped them pull it off. But nothing has ever happened even after such damning evidence emerged. And when a partisan court can reverse a conviction, as in the case of Maya Kodnani, it’s difficult to feel a sense of finality in the conviction of Sajjan Kumar.”

Friedrich does, however, see Kumar’s conviction as a positive development. “It has been said that justice delayed is justice denied, but it’s also true that justice is better late than never,” he says. “Over seventy years after the Holocaust, people who worked as death camp guards in their teens are still being charged and convicted. That happened at least twice this year, first with Oskar Groning, who worked at Auschwitz, and second with Hans Werner H., who worked at Mauthausen. It’s outrageous that it took 34 years to convict Sajjan Kumar, but the Holocaust has set the precedent that it’s never too late to prosecute someone for genocide.”

“This is one very, very small spark of hope in the middle of a great darkness,” remarks OFMI spokesperson Arvin Valmuci. “It is one tiny crack in the wall of impunity that guards the powerful who prey on the vulnerable communities of India. Impunity for the perpetrators of the 1984 Sikh Genocide empowered the perpetrators of the many massacres that followed after it. Convicting murderers like Sajjan Kumar has potential to enable the conviction of many other more recent killers. For now, we want to see Kamal Nath tried and convicted, but we won’t rest easy until we also see Narendra Modi branded as an architect of genocide and put behind bars.”