London: We are increasingly concerned about the negative and biased mainstream media portrayal of those peacefully protesting to uphold the protocols involved with the sacred Sikh religious wedding ceremony, the Anand Karaj, said Sikh Federation UK in a written statement sent to the Sikh Siyasat News (SSN).

SFUK press secretary Gurjeet Singh said that [u]se of terms like ‘militants’ and ‘thugs’ in headlines from two isolated incidences where protests have taken place, but when no violence on the part of protesters was involved and no charges or arrests were made is being blown out of all proportions by irresponsible media reporting.

“The latest is an article earlier this week in the Daily Telegraph under the offensive headline of: ‘Religious militants force mixed-faith couples to abandon wedding ceremonies’.

This followed an article several weeks ago in the Independent under the headline: ‘Wedding between Sikh bride and non-Sikh groom stopped by ‘thugs’ at London temple’ “.

In essence these two isolated cases involved internal disputes between those protesting that wanted the management of these Gurdwaras to uphold established protocols and not to give in to various pressures that naturally exist, he added. 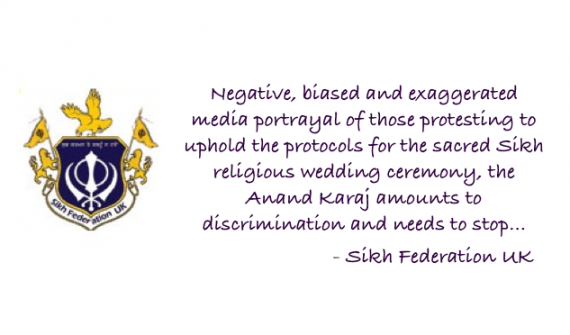 “We estimate around three thousand Anand Karaj ceremonies have taken place in the last 5-6 weeks in Britain’s 250 or so Gurdwaras without any need for protests. Hundreds of couples and their families have been educated about the significance of the Anand Karaj ceremony before going through with it or amicably agreeing to on an alternative arrangement as the couple were not both Sikhs” reads the statement by SFUK.

“The media is failing to adequately explain that protests are very rare and are not targeting the couples but the management committees of Gurdwaras and are about those permitted to partake in the Anand Karaj ceremony. Mixed faith couples that wish to get married are free to do so through a civil ceremony or a religious ceremony that is acceptable and understood by the couple and sanctioned by the relevant authorities that govern the place of worship in question i.e. church, synagogue, temple or mosque etc. Where the bride or groom are Sikh they can still attend the Gurdwara and alternative blessings can be given where friends and family can be invited”.

“Those with an understanding of the Anand Karaj know it is based on established protocols established by the Sikh Gurus that have been in place for hundreds of years and that these are not subject to negotiation. The recent media headlines appear to have come about as a personal vendetta by a certain freelance journalist mentioned in both articles who has also introduced the highly offensive term Sikh ‘Taliban’.”

“Several radio presenters, some are of Sikh origin, have continued with such abusive terms that in effect amount to racism. Such individuals who are of Sikh origin clearly do not agree with the teachings of the Sikh Gurus and believe they have a licence to use their positions and contacts in the media to offend and unnecessarily bring Sikh religious practices into disrepute.”

“Sikhs respect other religions, however our Gurus provided a distinct path in its own right with unique emphasis on the equality of all human beings. Sikhs are urged to live honestly, work hard and to look to the needs of their family and wider society. Sikhs believe in one God, the creator of all that exists and is beyond human understanding.”

“While many faiths share our belief in one God, their view of God is of someone having human attributes of gender, birth, favouritism, jealousy and anger. Sikhism uniquely is in favour of married life and this belief is central to the Anand Karaj ceremony in which the bride and groom affirm that they will henceforth be as one in mutual support and service to family and wider society.”

“There is considerable community frustration that important issues around human rights and identity discrimination continue to be largely ignored by the media, but there is some sort of obsession around the need for the Anand Karaj ceremony to be available to mixed-faith couples. This naturally raises some serious concerns around the motivation or intent with the continued pursuit of this issue from a negative, biased and exaggerated point of view.”

“The media have so far failed to compare Sikh practices with other major religions in this area, which are very similar if not more stringent. This kind of reporting targeting one particular religion and its sacred ceremonies and practices by those who do not understand, believe or follow the faith is discrimination and needs to stop.”