London: The Sri Guru Granth Sahib Satikar Committee regarding an incident which took place at Gurdwara Sahib in Hounslow (London) and which resulted in beadbi of Guru Granth Shaib. 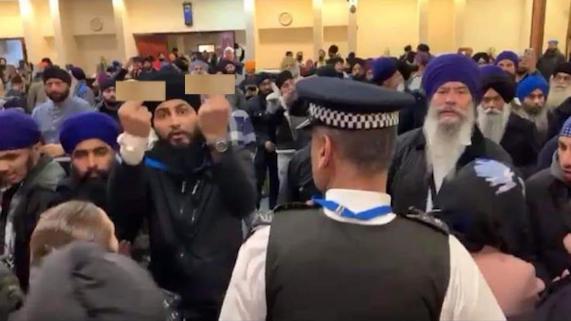 [File Photo of the incident]

The Sikh Siyasat News (SSN) has decided to reproduce the statement in verbatim for the information of readers. The statement reads as follows:

Sadh sangat ji, by now the global Panth will be aware of the incident that occurred in a West London Gurdwara Sahib, there is of course substantial amount of footage available from different angles showing different perspectives of the events as they took place.

Satkar Committee UK has been reviewing commentary across social media over the last few days to reflect on the many factors involved; it is with deep regret and of immense concern that most important key factor of the beadbi committed has been published as a secondary concern / point of discussion.

There are grave failings by all parties including the prabandakhs who were aware of a potential disturbance but failed to undertake measures to prevent the beadbi of Guru Sahib Ji in any way. This should have been their priority and the priority of all those that were in attendance. The duty of care by those elected to manage Satguru Sahib Ji’s asthaans should be to ensure Satkar is not compromised at any time.

We are extremely disappointed that Metropolitan Police failed to risk assess their entry into a Diwan Hall, especially when the authority has Sikh associations within its ranks across the UK. A protest was anticipated, officers should have been prepared by removing shoes and having their heads covered? These could have been strategically placed officers in the deevan to only act should there be a disturbance. Officers outside of the deevan need not have entered without measures of protocol. Footage shows that at the first altercation that took place the police reacted by entering with shoes on and most heads with uncovered particularly directly in front of Guru Sahib Jis tahbiya.

Satkar Committee UK later arrived on hearing of the beadbi and noted the inconsistency of the version of events by officers at the entrance of the Gurdwara Sahib. Moreover: Satkar Committee UK were denied access into Guru Sahibs asthaan, A Sergeant went as far as informing us that the ‘Joint Secretary’ of the Gurdwara Sahib had refused to meet us as he was not aware of our organisation.

Sadh sangat ji, whilst most are still discussing the events of Saturday 8th December we must make our lessons from this incident as our panthic priority; we humbly thank the sangat that did Sukhasan of Satguru Sahib pavan saroop for transfer into Sri Sachkhand Sahib Ji.

The fundamental issue here is that discussions need to take place as a matter of urgency for accountability of those that are considered custodians yet allowed the disruption to occur and subsequent beadbi.

There were a number of contributing factors to the above which included antagonising comments from the stage mic, bibiyan shouting and provoking people, protestors reacting to intentions etc.

We remind all sangat to consider the following when committing sacrilege:

There remain many unanswered questions which need to be addressed ASAP, as we compose this statement we hear of meetings taking place following last weekend; we sincerely hope that Satkar for our Eternal Guru Sahib is at the top of the agenda.