Speaking at a convention, Sikh professors of various universities criticised the leadership of the SGPC and the Shiromani Akali Dal (Badal) for the clandestine manner in which the Dera Sacha Sauda chief was pardoned, which was later withdrawn.

The convention was held under the banner of the SGPC. Its president Avtar Singh Makkar was present on the dais. Among others present at the dais were Gurmohan Singh Walia, Vice-Chancellor of Sri Guru Granth Sahib World University, MP Prem Singh Chandumajra and Education Minister Daljeet Singh Cheema. 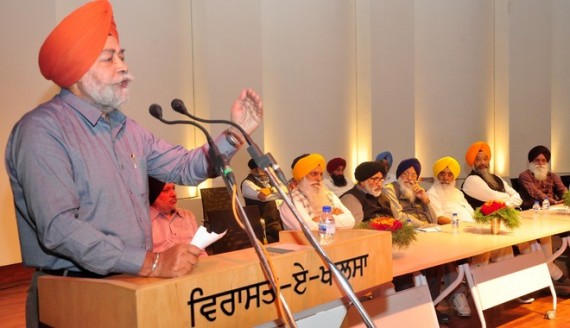 Speaking at the convention, Prof Sukhdial Singh said that in normal circumstances, Sarbat Khalsa could only be held at the Akal Takht. And only the Jathedar of the Akal Takht could convene it.

However in abnormal circumstances, other panthic bodies after consulting one another can also convene it and it could be held at any place. He, however, opined that the religious congregation scheduled to be held on November 10 cannot be called “Sarbat Khalsa”.
He said that

Turning to the issue of pardoning the Dera Sacha Sauda chief, he said a totally wrong procedure was adopted by the “Singh Sahibs”.

“The immediate removal of all the jathedars (Singh Sahibs) of the Takhts, who took the decision regarding the dera chief, will be in the interest of the Panth,” asserted Prof Sukhdial Singh.

He said that as SAD president Sukhbir Singh Badal had used the jathedars to get the dera chief pardoned, he should seek pardon from the Sikh Panth. The SGPC president should also seek forgiveness from the Panth for suspending the “Panj Pyaras” as it was an absolutely wrong decision.

Later, the SGPC president was asked whether he would seek forgiveness, he ducked the question by raising another matter.

He SGPC, however, read out pre-drafted resolutions criticising organizers of the November 10 Sarbat Khalsa.