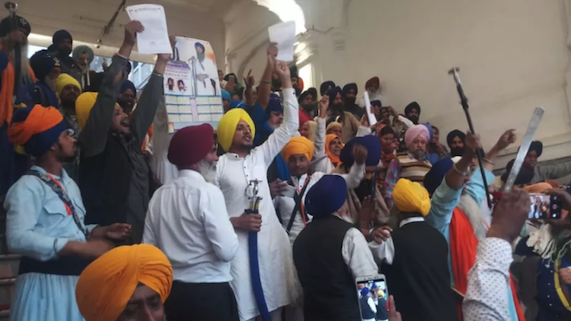 It is notable that after Giani Gurbachan Singh led SGPC appointed Jathedars granted so-called pardon to Dera Sauda Sirsa chief Gurmeet Ram Rahim in 2015 the Sikh sangat had refused to accept their authority and they were rejected as ‘Jathedars’. But the SGPC continued to back Giani Gurbachan Singh until recently. Meanwhile a section of Sikh organisations held a gathering in village Chabba on November 10, 2015 and announced to appoint “acting” jathedars for three Takhts.

A section of Sikh sangat and various Sikh organization have been opposing SGPC appointed Jathedars since then.

The political use of post of Takht Jathedars by Badals has eroded the sanctity of the post and the appointment of parallel Jathedars by some groups has further added to the complexities of the situation. Groups backing SGPC and organisers of the Chabba gathering of 2015 regard their appointees as Jathedars, whereas some other groups do not regard either of the appointees as Jathedars and the common Sikh sangat is in state of confusion.