Amritsar:  To observe the 33 years of army assault on Darbar Sahib, the SGPC president and Dal Khalsa activists here today discussed the ways to make the June 6 congregation at Akal Takhat Sahib peaceful and in accordance with panthic maryada. 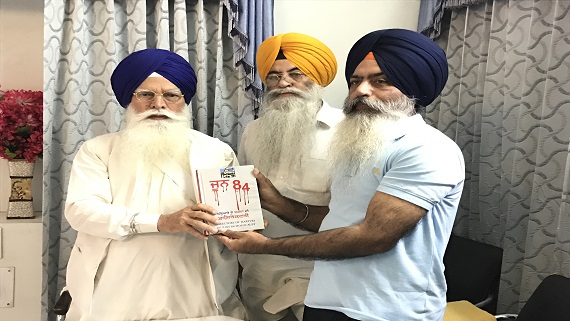 Prof Kirpal Singh Baduangar had a 30 min meeting with Kanwar Pal Singh at the official residence of the former. Both expressed their concerns about the unsavoury situation being aroused at Akal Takhat Sahib in the preceding  years on June 6. Kanwar Pal Singh assured the President that theirs group will fully cooperate with the organizers.

He said theirs group was always of the view that internecine feud and clashes within the community at sacred places especially Darbar Sahib is detrimental to maryada and Panthic interests.

Dal Khalsa reached out to the SGPC in spreading the word to all local gurdwara committees in Punjab to hold prayers meet on June 6 and pass resolution against army assault on Darbar Sahib and 37 other gurdwara’s codenamed “operation Blue Star”.

Dal Khalsa leader also urged Prof Baduangar to install portraits of martyrs of June 1984 at the lower ground of the Shaheedhi Yadgar- the gurdwara built in memory of the martyrs within Darbar Sahib complex. As per Dal Khalsa press release, the SGPC president responded positively on both matters. Dal Khalsa presented a copy of the Directory of Martyrs of June 1984 holocaust to SGPC president.