Amritsar: After the Punjab Government booked the organizers of the Sarbat Khalsa 2015 under the charges of sedition, the SGPC has also lodged an FIR against Bhai Dhian Singh Mand who was appointed “interim jathedar” of Akal Takht during the Sarbat Khalsa 2015 on November 10. In it’s FIR the SGPC has alleged that Bhai Dhian Singh Mand along with his supporters creating ruckus and panic among Sangat at the Darbar Sahib complex on Bandi Chhor Divas.

Bhai Dhian Mand is in judicial remand and is lodged in Nabha jail. Jaskaran Singh Kahn Singh Wala and Satnam Singh Manawa are in police remand at the Chattiwind police station in Amritsar.

On the basis of a complaint lodged by Darbar Sahib manager Partap Singh, a case under various sections of the IPC and the Arms Act has been registered against Mand and his supporters at the E-Division police station. 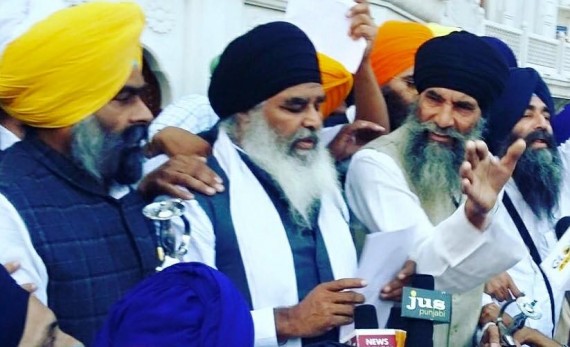 Notably, it was announced at the Sarbat Khalsa 2015 that Bhai Dhian Singh Mand would represent jailed Bhai Jagtar Singh Hawara as the Akal Takht Jathedar in absentia.

Darbar Sahib manager Partap Singh has alleged that he saw around 200 persons armed with swords, sticks and spears heading towards Akal Takht around 5.15 pm.

“They were raising anti-government and pro-Khalistan slogans. The SGPC task force and I tried to resist them, but they kept on wielding swords. One of them climbed atop a construction site near ‘Darshani Deori’ and tried to break open the doors of the Toshakhana by kicking them. The situation was tense and the devotees had started running around in panic,” The Tribune quotes manager Partap Singh as saying.

Moreover, the Sikh sangat had caught Badal Dal supporters, who was reportedly brought to Darbar Sahib on Bandi Chhor Day by a Badal Dal leader, were caught smoking and using alcohol in a Sari in Darbar Sahib complex. They were handed over to the police by the Sikh sangat. But the police had reportedly released them without taking any action and even Darbar Shaib manager did not make any complaint against those persons.