Amritsar: The Shiromani Gurdwara Prabhandak Committee (SGPC) has written a memorandum to the Indian President- Pranab Mukharjee, seeking appointment to make his a request against the death sentence granted by Indian Courts to Sikh political prisoner Bhai Balwant Singh Rajoana.

As per a written release issued yesterday, the SGPC secretary Harcharan Singh written has sent a reminder on this issue the Indian president as he has not responded an earlier letter (dated: Nov. 15, 2016) written by the SGPC chief Kirpal Singh Badungar. 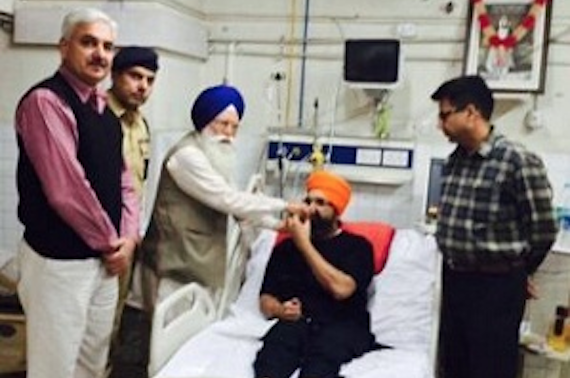 Notably, Bhai Balwant Singh Rajoana was sentenced to death by trial court in Punjab CM Beant Singh’s execution case and his death sentence was confirmed by the Punjab and Haryana High Court. Rajoana had not contested his case expressing no faith in Indian judicial system. In 2012 the trial court had issued execution orders against Balwant Singh Rajoana but there was widespread protest from the Sikh masses. After which the SGPC had moved to the president of Indian against his execution. The constitutional review petition moved by the SGPC is still pending before the president of India. Last month Balwant Singh Rajoana had started hunger strike in Patiala jail to protest against delay in his execution. He had ended his hunger strike on Kirpal Singh Badungar’s assurance that the SGPC would take up the matter with the Indian president.