The SGPC raised the issue with Indian Army chief Bipin Rawat during his visit to the Darbar Sahib. As per reports, accompanied by his wife Madhulika Rawat, the Indian army chief was shown the library from outside by the SGPC officials.

The army took away the rare handwritten manuscripts of Sikh scriptures and precious literature from the library situated along ‘parikarma’ of the sarovar on the Atta Mandi side. The Sikh organisations, including the SGPC have been demanding that these should be returned. 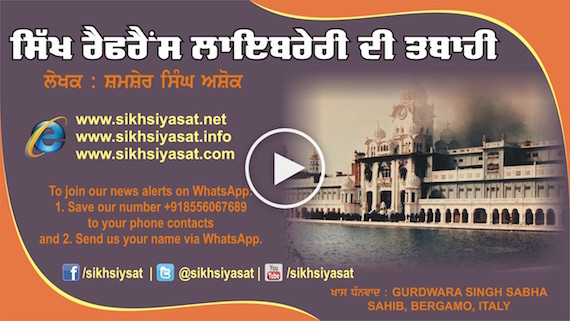 “Making him aware of destruction of the library, I urged the general to clarify whether the literature the army seized is still in their possession or not. If the army has it, they should return the texts at the earliest or they will decay with the passage of time”, a report in Hindustan Times (HT) quotes SGPC chief secretary Roop Singh.

“I also raised the issue of library with him urging him to return the seized material,” said SGPC president Gobind Singh Longowal.

“The issue of library has been brought to my notice. I was not aware of it and will look into the matter,” Bipin Rawat reportedly said.