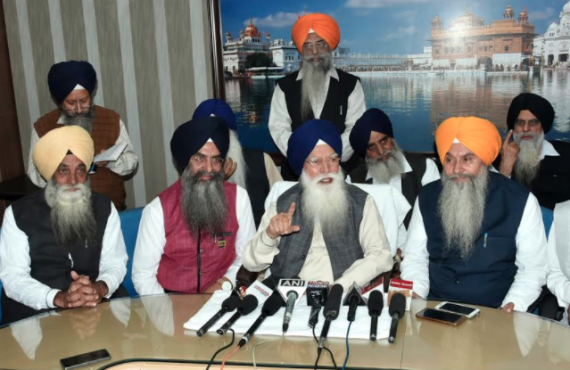 Addressing a press conference in Amritsar SGPC  chief Kirpal Singh Badungar said that a seven member delegation has sought time from Indian President to meet him in order to filled another petition against death sentence of Bhai Balwant Singh Rajoana.

A letter written by SGPC to the president of India reads: “This plea is in respect of Bhai Balwant Singh Rajoana who had been sentenced to death by the Learned Additional Session Judge, Chandigarh, on 27.7.2007 a sentence which has been affirmed by the Hon’ble Punjab and Haryana High Court, Chandigarh. An appeal for clemency under Article 72 has already been filed before Your Excellency and is pending consideration since 2012“.

“The Shiromani Gurdwara Prabhandhak Committee the apex body of the Sikh Community in the world is invoking the power of Your Excellency for grant of clemency to Bhai Balwant Singh Rajoana. This appeal echoes the sentiments of the entire Sikh community which is desirous of taking up this cause as the accused has preferred riot to file any mercy petition on his own accord and on the contrary has sought expeditious execution“, SGPC’s letter reads further.

We may submit that the death sentence, if executed would result in a grave miscarriage of justice and would further result in a serious compromise of the Right to Life and liberty enshrined under Article 21 of the Constitution of India. Bhai Balwant Singh Rajoana has already undergone incarceration for over 20 years. The need to seek an audience with Your Excellency has arisen due to the mental distress suffered by Bhai Balwant Singh Rajoana in regard to the decision upon his fate.

The S.G.P.C. has constituted a seven-member committee, under the chairmanship of the undersigned being its President of this august body to pursue the legal matter in respect of the pending mercy petition before you. The following have been assigned as members of the Committee.,

The issue regarding grant of clemency to Bhai Balwant Singh Rajoana is close to the heart of every justice loving person, as it is a matter of record that the act attributed to him, which has led to his conviction, was a result of his religious and ideological beliefs. Granting of clemency to him would go along way in restoring the faith of a common man in the constitutional and judicial system of India. The inordinate delay in executing the sentence of death penalty has also created a deserving case in favour of Bhai Balwant Singh Rajoana.

In an effort to place its views with regard to the pending appeal for clemency and to urge the additional grounds in its support, the seven-member committee including the undersigned seeks an audience with Your Excellency at an early date. Your Excellency’s kind indulgence shall go a long way in assuaging the feelings of this minority community.