SGPC President Avtar Singh Makkar and Secretary Roop Singh said that they would meet India’s Home Minister and other concerned authorities to take up the matter afresh.

‘We had been making efforts to bring back treasure trove of rare books and manuscripts but they haven’t borne fruit till now’ they added. 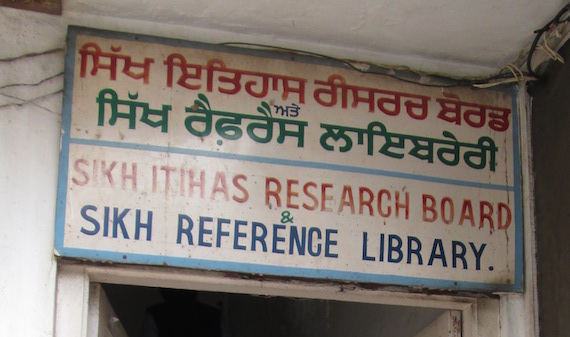 The duo informed that SGPC had taken up the matter with the then India’s Defense Minister George Fernandes when he had visited Harmandir Sahib, Amritsar during the previous NDA government. Taking action on this, Fernandes later informed the SGPC that the articles of the Sikh Reference Library were “safe” with the Merut unit of Indian army. He had even promised to hand over the articles to the SGPC. But there was not progress in this regard afterwards.

In 2009, the then Defence Minister AK Antony had told Parliament that the Army had returned everything to the SGPC which had accused the former of misleading the upper house., notes The Tribune.

It is noteworthy that Indian Government has always tried snub the issue saying that all the treasure trove of Sikh Reference Library got burnt during army attack on Darbar Sahib in June 1984. But an eye witness (Punjab Police Inspector) had later claimed that the Army took away ‘Handwritten Saroops’ and other rare manuscripts of the Sikh Reference Library. As per media reports around 75 books and 3 registers were retuned to the SGPC by Intelligence Bureau (IB).

One of the register contains complete detail of rare books and manuscripts, which depicts their count 12613 and 512 respectively, notes a report in Punjabi Tribune (PT).

Though the SGPC has tried to revive the Sikh Reference Library over the last three decades, it is still incomplete without these rare books and manuscripts reportedly taken away by the Army post-Operation Bluestar.