SGPC would not hand over charge of Haryana based Gurdwaras to HSGPC, reasserts Avtar Singh Makkar

Amritsar, Punjab (August 02, 2014): Shriomani Gurdwara Pharbandhak Committee (SGPC) president Mr. Avtar Singh Makkar was quick to respond to HSGPC’s move to get the control of Historic Sikh Gurdwaras in the Haryana, that are currently under the control of SGPC.

Avtar Singh Makkar, on August 01, categorically stated the SGPC would not hand over the charge of Haryana based Gurdwaras to newly announced Haryana Gurdwara Prabhandak Committee (HSGPC). 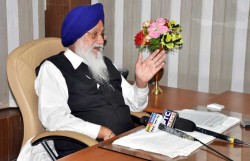 “SGPC don’t recognize the HSPMC which is creation of the Congress party Government in Haryana. So there is no question of handing over the charge to HSGPC” said Avtar Singh Makkar.

He further said that the newly elected president of HSGPC (ad hoc), Jagdish Singh Jhinda, has already been excommunicated by the Akal Takht Jathedar and in such circumstances the charge of Haryana based Sikh Gurdwaras could never be handed over to the excommunicated person at any cost.

He also pleaded that the Akal Takht Jathedar’s edict to maintain status quo by not handing over the charge to the newly built HSGMC is still in operation, therefore SGPC is duty bound not to handover charge of Haryana based Sikh Gurdwaras to HSGPC.

Avtar Singh Makkar said that SGPC would never allow Jagdish Singh Jhinda to check the bank accounts where funds of all Haryana based Gurdwaras were deposited. Excommunicated Sikh has no right to take part in any of the religious activity in Sikh religion, he said.

It is notable that on 31 July, 2014 the HSGPC executive had decided to adopt “financial route” to gain control of Sikh Gurdwaras.