Shanghai: The Shanghai Municipal Agriculture Commission will partner with the Punjab government to transfer technology as well as help Punjab farmers to grow Chinese vegetables to give a boost to the State’s diversification drive, states a press released issued by the office of Deputy CM Punjab.

“This assurance was given by Shanghai Agriculture Commission Vice Chairman Feng Zhioyong during an interaction at the Commission’s headquarter in Shanghai. Mr Zhioyong gave a brief about the activities of the commission including its huge consumer base. He said the Commission had already visited Punjab and would identify areas of mutual interest for sharing of best practices. He also expressed satisfaction with the measures being taken by the Punjab government to attract industry and said there was a huge scope for investment in the food processing sector”, the statement reads. 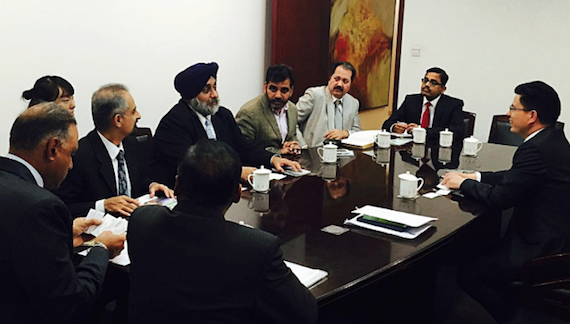 Sukhbir Badal in a meeting with Chinese Cycle manufacturers in Shanghai on Monday May 9, 2016

As per the release, the Punjab Deputy Chief Minister Sukhbir Badal while speaking on the occasion said Punjab was promoting food processing industry in a big way and urged Chinese companies to invest in this sector. He also gave details of the tax concessions as well as availability of pre cleared sites and fast clearances to set up industry in Punjab.

The Press release further reads as:- “Business delegate Bhavdeep Sardana of Sukhjit Starch suggested that Punjab could use Chinese agriculture technology in soya bean processing to catapult its agriculture sector to the next level. He said Punjab farmers could also grow vegetables used in Chinese cuisine”.

“Following the meeting with officials of the Agriculture Commission the Punjab delegation also visited the State owned Bright milk plant in Shanghai. The plant, which is one of the biggest in China, is one of the biggest producers of ultra heat treated (UHT) milk. … Sukhbir Badal suggested during the visit that Chinese expertise in this sector be used to rejuvenate the Verka brand as well as produce UHT milk in Punjab which could be marketed successfully during the summer months when there is a shortage in supply”.

“Earlier in the morning a large number of high end bicycle and electric cycle manufacturers pledged their support to the proposed Cycle Valley coming up in Ludhiana in one to one meetings with Mr. Sukhbir Singh Badal”.

“Sukhbir Badal along with Hero Cycles Chairman Pankaj Munjal discussed the exact nature of investment which could flow into the Cycle Valley as well as the quantum of investment. Several companies said they were looking at investments between five to ten million dollars in the initial stages”.

“Pankaj Munjal while discussing the business model of the new integrated cycle park, said the company was in the process of tying up with Chinese bicycle manufacturers high end cycles for different segments. There is an immense demand for lifestyle cycles including mountain cycles. “We in Hero have increased production of mountain cycles from zero to two lakh in two years”, he added.

“Among the top company representatives meeting the Deputy CM today included Promax Taiwan company general manager Johny Lin. Promax produced components for high end bicycles. Mr Lin said he was in advance talks with Hero group to set up a facility in Ludhiana. Besides this other companies meeting the Deputy CM included Jonson Ju of Shenzhen New Canghai Machinary Co Ltd. Mr Ju said his company was not only manufacturing bicycles but also trading worldwide in cycle parts. “We would like to have a presence in the Cycle Valley also “, he added. Others meeting the Deputy CM included Brian Tang of Sate Lite which is the largest manufacturers of reflectors and Kent Lee of Hangzhou Joy Kie Ind and Trad Co Ltd.